The team at Kinetic Games has billed this as their "big update including many major bug fixes and optimisations" and that certainly seems to be the case based on the patch notes revealed earlier today.

You can see some the full list of changes applied to the game further down, but the big headlines come in the form of new features for the game.

Update 3 for the game, released October 29, largely applies some of the key changes made to the games recent beta update. Namely, there's now a voice sensitivity slider, tweaks to the text on Phasmophobia's Spirit Box as well as several additions for Halloween.

Oh and one more thing... In addition to the new update, Phasmophobia will be in the Steam Halloween sale with a 10% discount. So if you know someone who might be tempted to jump, now is as good a time as ever to buy the game.

Keep reading for the latest patch notes, or if you need some extra help, check out our extensive collection of guides to help you with your ghost hunting exploits. 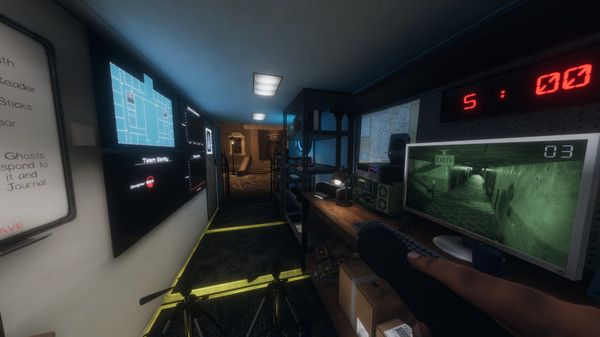 * Upgraded the server code to PUN2. This should fix most timeout disconnects and all voice chat issues.
* If your voice recognition is working you can no longer get a response on the Spirit Box just by talking, it will now only answer if you asked a question.
* Updated localisation.
* Lowered the pitch of the EMF Reader sound.
* Lowered the brightness of the lights on the main menu.
* The Australia server has been removed from the region selection.
* Ghost writing will now count for photo evidence.
* The lobby room list will no longer show empty or full rooms.
* Lowered the amount of sanity that you lose during a ghost event.
* The Ghost Orb and Bone will now spawn more towards the middle of the room.
* If your voice recognition stops working the Spirit Box will default to giving a random response by talking.
* The room temperature will no longer raise over time if the ghost leaves the room.
* Most of the save data has been moved off of the save file to help with optimisation and help prevent save files getting corrupted when you crash.
* The server invite code will now always be hidden by default.

* Added a voice sensitivity slider in the audio options.
* The text on the Spirit Box will say what the response said.
* Added a copy button for the server invite code that can be used when the code is hidden.
* Added text to show the server version on the server password screen.
* Added a button to enter passwords from your clipboard.
* Added LIV support for VR.
* Additions for Halloween.