We're still waiting to discover who the new SBC and Objectives players are, but for now, here's included in FIFA 21 Rulebreakers Team 2: 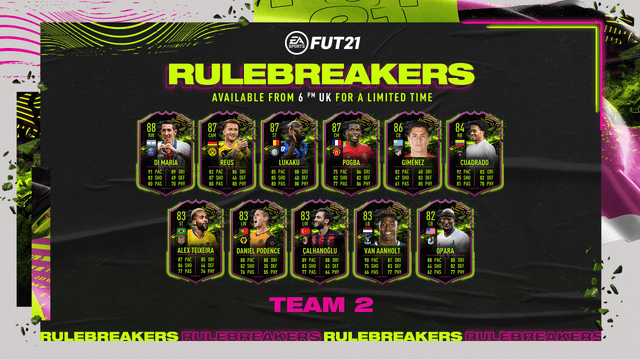 FIFA 21 Rulebreakers Team 2 Update - EA Sports has been teasing two possible players for Team 2. Follow the link to read the latest news and everything we know.

Original Story Follows - Rulebreakers Team 2 arrives tomorrow in FIFA 21 Ultimate Team, and is set to build on the first week of this exciting new promo with even more new, top level cards in FUT 21.

With Rulebreakers appearing to have replaced the popular Ultimate Scream event from previous years in FUT, we can expect to see some different styles of player boosts in Team 2, with some seriously enticing new options for teams.

We’re expecting Rulebreakers Team 2 to build on the impressive first team that was released last week! 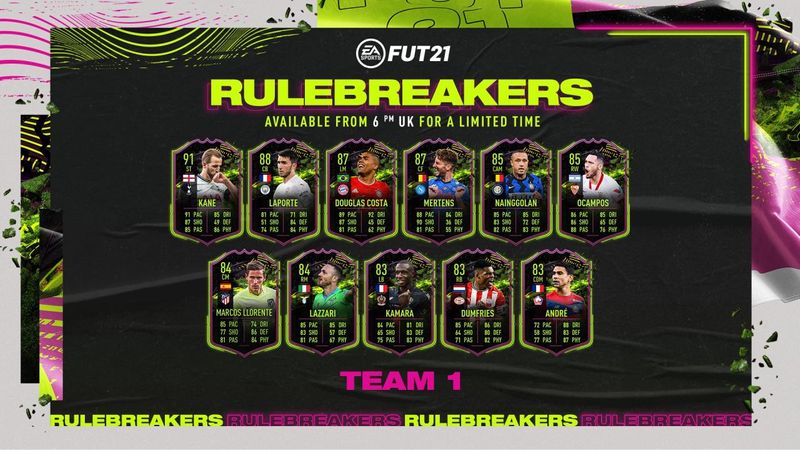 As we’ve seen from the first team that was released, Rulebreakers completely ignores all the previously assumed possibilities when upgrading cards, leaving behind their previous styles of play, transforming them into new types of cards with eye-watering upgrades.

We’re expecting plenty more of the same over the next week of Rulebreakers, as we get our hands on:

Rulebreakers Team 2 will be released on Friday 30th October at 6pm BST, and will likely be in packs for 1 week.

It’s worth noting that Rulebreakers Team 1 will go out of packs at this time also.

While the possibilities for the Rulebreakers Team 2 are seemingly endless, here are some players we’d love to see included in the 2nd half of the promotion!

With Lewandowski missing out on a TOTW this week despite getting a hat-trick plenty are assuming he’s going to be included in the 2nd Rulebreakers team, with a big pace boost, similar to Harry Kane’s card from the first team.

The Italian has long been considered ‘SBC fodder’ in FIFA Ultimate Team, given his low pace statistic and short stature in game. With a boost in pace, Verratti would no doubt become one of the most popular CDMs in FUT, linking to Neymar and Mbappe with high level defending, passing and dribbling attributes.

Marcelo has fallen down the popularity rankings in recent years as he neared the latter stages of his career, purely due to his consistent reductions in pace. If he saw a boost to his pace statistic, combined with his 5* Skills, Real Madrid and Brazilian links, he could be the new go to LB in FUT.

We’d love to see Ribery returning to his former glory with a boosted pace item in FUT this year. With 5* Skills and 5* Weak Foot, a card boosted to have high pace would make for a very in demand item this year.

An Adama with shooting stats would be the epitome of the Rulebreakers promo. We’d love to see a card perhaps with boosted shooting at the expense of some of his raw pace and physical ability to create a more well rounded goal scoring threat instead of a pure physical presence.

So far EA Sports have given fans two possible clues teasing two players who could be included in Rulebreakers Team 2.

The first teaser is for a German CAM player with 80 Passing and 80 Physical. Sounds like Thomas Muller if you ask us.

The second teaser is for a striker from Inter Milan with 85 Pace and 85 Shooting, which could very well be Lautaro Martinez.

Only time will tell, and we could see some more teasers ahead of the full reveal later today. 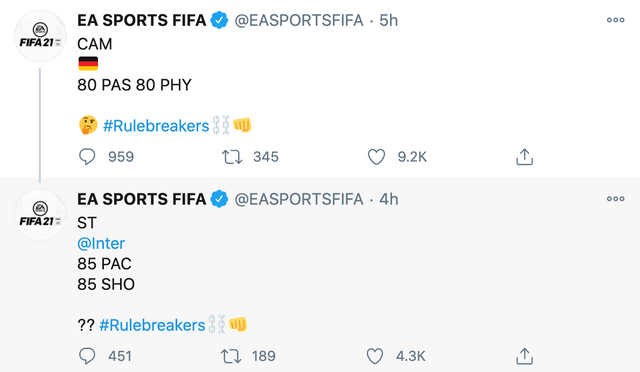 Currently, there are 3 Rulebreakers SBCs available in FUT 21, with Inaki Williams, Pierre Kunde Malong and Anderson Talisca all being available.

Over the next week, we’d expect more Rulebreakers SBCs to be released into FUT 21.

In Rulebreakers Team 1, we saw the release of Nordi Mukiele into objectives, an incredibly popular player that will no doubt make it into a number of teams at this point in FUT.

Featuring 91 Kane, 87 Douglas Costa, 87 Mertens and plenty more, this team looks stacked with tonnes of top tier talent that’ll be sure to ‘break the rules’ and change up the FUT 21 meta!