Remember Anthem? Bioware's loot-shooter live-service title is still being worked on by a core team, and the developer has revealed a new UI redesign.

In a new blog post, the team has explained changes coming to the game's classes and building out a specific playstyle, as well as a new series of skill trees.

The new work-in-progress UI looks clearer (and sleeker) than what came before. Check out an in-progress screenshot below. 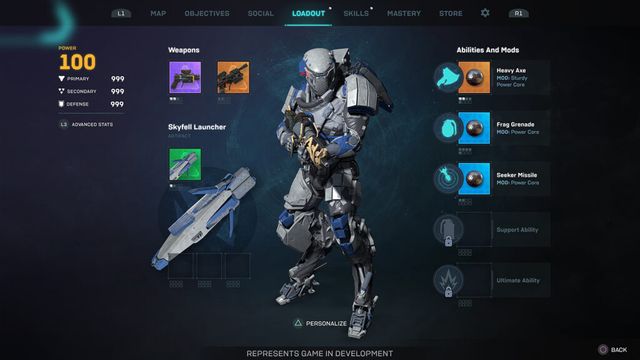 The new design of the loadout screen looks much more informative

The blog post acknowledges that the team has heard fan feedback regarding in-game builds, and has rearranged items to fit one of 11 equipment slots.

Weapons are either primary or secondary, and components have been replaced by Mods and Artifacts, the latter being a new addition that offers more customisation

"We’ve heard from you that Components feel like nothing more than stat modifiers. With that in mind, we’re also experimenting with a new Artifacts system to replace them," the blog post reads.

"Artifacts are pieces of super-powered tech that set your Javelin and Freelancer apart. Each Javelin type would have a distinct Artifact catering towards its class fantasy."

"For instance, your Ranger’s rocket pod would be upgraded into the Skyfell Launcher Artifact, a pair of back-mounted pods that transform into powerful rocket launchers."

"These Artifacts would change in appearance, depending on what parts you equip. There’s also an opportunity to allow for more interesting decision making. The parts you equip would contribute to a powerful passive ability generated by the Artifact."

Interestingly, players will be able to change their abilities on the fly in the loadout screen, with the screenshot above suggesting we'll be able to use a Heavy Axe, too.

Abilities won't be drops, but they can be bolstered with the use of Mods. Inscriptions remain, but only to "improve build synergies".

Each of the game's four Javelin classes can level up, allowing players to earn Skill Points which can be spent on abilities, passives and stat boosts, while each class has an advanced skill tree.

Javelins also "have access to multiple specializations that cater to different styles of gameplay", with the Ranger offering "Captain", "Longbow" and "Soldier" variants.

"In this system, each Javelin would have a “basic” skill tree where all the baseline Abilities, Passives, Triggered Abilities, and Stat Boost for your Javelin can be unlocked," the blog explains.

"We would like you to be able to focus on the specific style of gameplay you like best about your Javelin, so after the basic tree is completed, we’re also testing the concept of Specializations. Each Specialization would have an Advanced Skill Tree where you’ll unlock Specialization-specific Abilities, Upgrades, and more."

Anthem was my most-anticipated game, and I'm not sure I'm ready to get hurt again, but this all sounds very promising.

Here's hoping Anthem Next or Anthem 2.0 is able to bring the game back to life.