Rat King Destiny 2 quest: How to get the exotic sidearm

The Rat King’s crew stands three as one.

Beyond Light will bring loads of new content to Destiny 2 on November 10, though many planets and locations will also be “vaulted” in the process. This means some of the game’s best missions, raids, and quests will either get altered or be made unavailable for an indefinite length of time.

Here’s how to get your hands on the Rat King — for the time being.

What’s the Rat King in Destiny 2?

Other than just completing your collection, the Rat King’s worth having because it’s one of the weirder weapons in Destiny.

Its “Vermin” perk starts things off normally enough; reloading after a kill grants you a brief period of invisibility. But the real reason you’d want this year-one weapon is its unique “Rat Pack” perk. 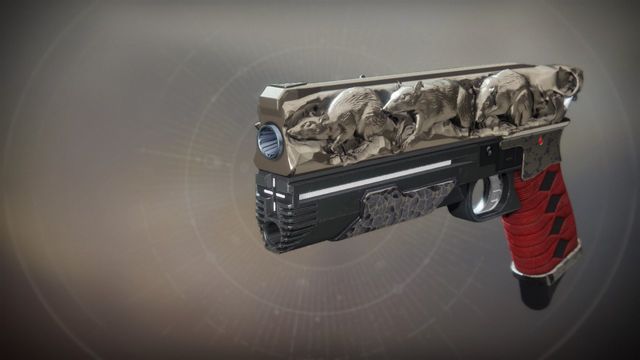 With Rat Pack, the sidearm’s damage output increases slightly for each additional Rat King that’s nearby.

If your whole squad equips the weapon, you’ll be dealing some hefty damage.

Rat King quest: How to get started

Your first step will be to progress far enough on Titan to unlock the “Enemy of My Enemy” world quest.

Complete it, and you’ll receive the “Rat King’s Crew” quest.

“Enemy of My Enemy” is nothing difficult; just go where you’re told and eliminate any obstacles in your way. Once you’ve completed this quest, you’ll be given a set of riddles. Solve them all, and you’ll unlock the exotic Rat King.

Read more: How to get the Malfeasance exotic hand cannon

The “Rat King’s Crew” quest line features four riddles, all of which require you to have at least one other person in your fireteam.

So grab a friend and knock out the following objectives.

First riddle: “The Rat King’s Crew / Runs to and fro / Good girls and boys / Know where to go / Pick up your toys and darn your socks / On errands of woe, on errands we walk.”

Second riddle: “The Rat King’s Crew / Goes arm in arm / To fight as one / To do no harm / So have your fun and run outside / Rally the flag and we’ll never die.”

Third riddle: “The Rat King’s Crew / Goes four and four / With good, good fights / They learn to score / Then three as one they stand upright / Return from past the wall and wanting more.”

Fourth riddle: “The Rat King’s Crew / Stands three as one / They see Night’s fall / And fear it none / But watch the clock as you scale the wall / Lest five remain, hope comes for none.”

Most of these shouldn’t cause you problems; only the last one’s difficult. Our advice is to go in with as large a fireteam as possible, be well practiced, and keep running it until you succeed. There isn’t much else to it.

Complete all four riddles, and you’ll have yourself the Rat King exotic sidearm!