The Watch Dogs franchise tells the tale of a hacktivist group, DedSec, liberating people from tyranny by running around hacking things with your trusty mobile phone.

After the incredible critical success of Watch Dogs 2, we had high hopes for Legion. This time, DedSec is desperately trying to save London from the clutches of a pure evil: a terrorist who tries to blow up the Houses of Parliament in the opening act. This is such a big no-no here in blighty that we have a nursery rhyme about it.

What’s worse is that we have a tyrannical government which has gone AWOL after working with a truly despicable cast of villains, from the paramilitary group Albion, which doll out extrajudicial beatings for funsies, to the organ-thieving slave-selling gangsters of Clan Kelley.

Also, the queen is missing. Basically, it’s all gone to s**t. 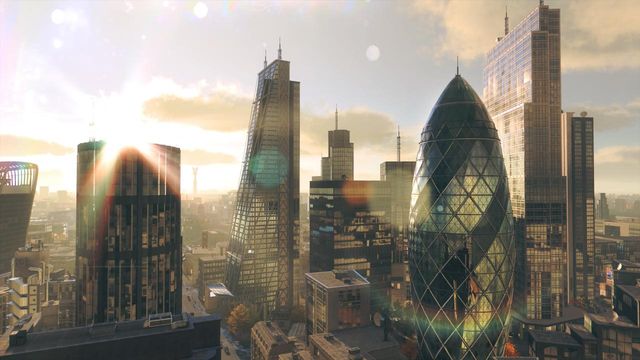 Games about injustice are always going to catch the eye — especially in today’s day and age when the public watches Westminster with ever-growing scrutiny.

And Legion is certainly eye-catching. The major draw of this game, other than running around London, which is rare enough as games go, is the promise of being able to recruit almost everyone in the game to your cause.

Old lady with a machine gun? Go for it.

A crazy beekeeper with a swarm of robot killer bees? Have at it.

Secret agent with who drives a spy car equipped with hidden rockets? London is your oyster.

If you rolled your eyes at that last line, strap in because this is going to be one hell of a ride.

At first glance, the world of Watch Dogs Legion is very exciting. The idea of running around London, climbing Buckingham Palace and sticking it to the government is one that will give any anarchist hot flushes.

And doing it in the game is certainly enjoyable. There’s something uniquely fun about hopping on a drone, flying it over Scotland Yard and whipping out a pistol to shoot a VIP baddie in the noggin.

As more time passes, the veneer fades and you soon notice all manner of issues tucked away that you really have to work against to continue your enjoyment of this vast* open-world. 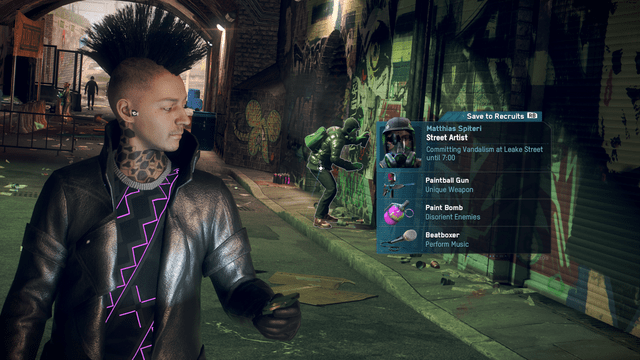 First and foremost, let’s explain that caveat. Legion is set in a futuristic London. Landmarks such as Big Ben are emblazoned with holographic propaganda; the Shard, in a bid to make it look even more like the Eye of Sauron, has a hologram floating above it.

With this said, it’s perhaps believable that some of the tube stations in the game don’t exist in real life. I’m even willing to overlook the ‘Subway’ sign I saw over a tube station, as I have much bigger fish to fry.

The opening of the game boasts that London took 1200 years to build, which makes you wonder why Ubisoft cut corners in their interpretation of the city.

‘London’ in this case, is simply most of Zone 1 (in reality this is just under 3% of London).

This will mean little to people who aren’t from London. On one hand, it’s really cool to hear my girlfriend look up and comment that she’s been to a cool pub near where I’m standing, but it’s equally weird that pub is just an office block in the game.

It’s also disorienting when I expect to see my office towering at the end of the street, but instead find a tiny patch of grass. 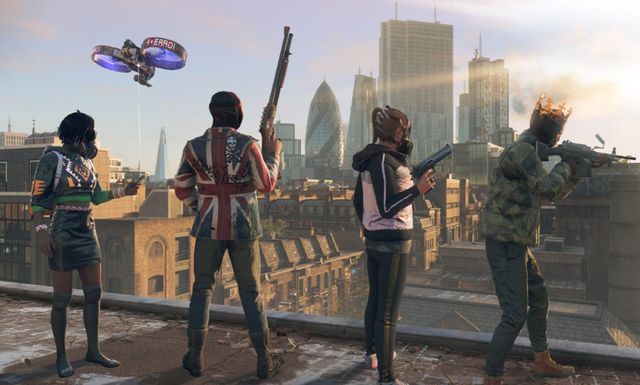 This is something that non-locals will no doubt be fine with, but it does raise the following question: If Insomniac can comfortably create almost faithful recreation of Manhatten in Spider-Man, why has Watch Dogs Legion cut out great swaths of Zone 1, which is 25% (15km2) smaller? I can’t think of any good reason to condense the city this much.

Onto something that everybody will notice: the voice acting. You don’t need to have been born by Bow Bells to know they’ve cockneyfied this right up.

Sure, it’s vaguely amusing the first time you hear someone shouting “f**k me sideways” as you fly your drone by them at speed, but it gets pretty droll very quickly. We do swear a lot, and we swear often. But there is diversity in our diction, unlike in Watch Dogs Legion.

This is most obvious when you recruit a newbie to your team. It seems that the game is pulling audio lines from a very shallow pool of options, as you don’t have to play long before you’re hearing recycled lines. 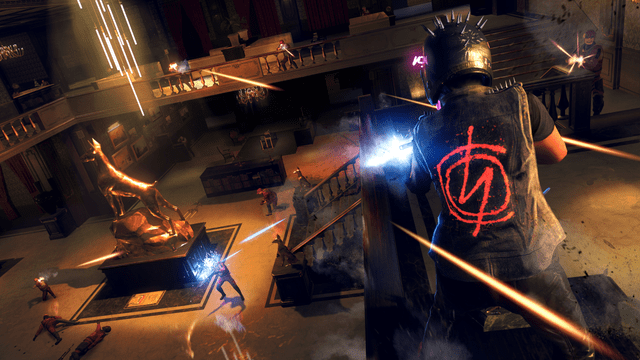 What takes this from bad to worse is how quickly the voice acting falls apart. Initially, I was quite impressed by the diversity Ubisoft offers here. There’s a good mix of genders and ethnicities in the game’s opening cast. I was hoping that this would permeate throughout the game.

But again, over time it becomes noticeable that everyone sounds like Guy Ritchie directing Del Boy on the set of Two Pints of Lager.

Not only is the delivery entirely forced, but the writing is simply awful. It’s as if the writers took a travel dictionary and jammed in as much local slang as they possibly could.

One line from a potential recruit was genuinely: “I'm a slave, do me a solid and free me?” — a warped caricature of Oliver Twist crossed with Monty Python. 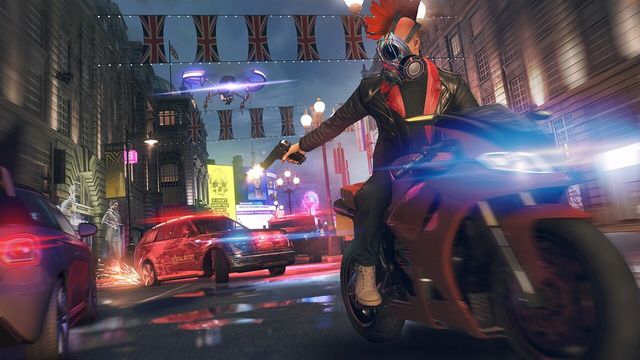 This attempt at making almost everyone sound like a stereotypical Landaana just doesn't sit right.

I said ‘almost’ because there are, of course, other accents in Watch Dogs Legion, although these are predominantly Jamaican and, on occasion, Etonian. Amusingly, however, my last Etonion had cornrows.

Cockney waving contests aside, it is clear that there are audio bugs. You frequently find that the game struggles to keep pace with the audio, making it sound like everyone is talking through a fan. This is often accompanied with dropped frames in the middle of a high-speed chase. The only way to fix this is to reboot the game.

Unless the game reboots for you, that is — although the now widely publicised 404 error (hilariously, Xbox Ones overheated in the mission ‘404’ and crashed) has been patched, I’ve had my PS4 crash outside of this. 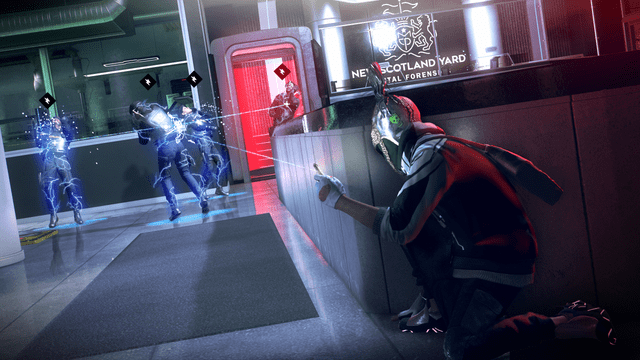 Coupled with the ridiculous loading times (it has taken over a minute loading from the main menu and loading screens are frequently 30 seconds or more), it’s painfully clear that this game is in dire need of optimisation.

The load times should be vastly improved when the game is released on the PS5 and Xbox Series X. This is a real issue on the PS4 as the game’s main gimmick — swapping between your recruits — would become a far less painful procedure without a hefty load screen.

With a bit of luck, the city will get a facelift too, as the textures are equally worrying on occasion, especially so for a game releasing so late in the console's lifecycle. This can be seen in everything from skin textures to the water physics if you decide to jump in the drink. A quick paddle in the Thames shows that water — notoriously a liquid — does not move around solids placed in it.

Returning to our friendly neighbourhood flagship, it’s astounding how bad Legion looks when you compare it to the likes of Spider-Man. But given what the PS5 version of that game looks like, I’m holding out hope for a facelift of Harley Street level proportions.

Watch Dogs Legion isn’t all bad, but it certainly needs work. If you’re keen on the game after reading this, all I can say is get it on a next-gen console. There’s a great idea built into a world with an interesting gimmick, but getting through it is an uphill battle right now.

Nobody expects Ubisoft to produce a 1:1 recreation of London, but we were hoping for something more than a caricature of Londoners in a poor replica of our beautiful city, hidden behind a game in dire need of optimisation.