The Guangzhou Evergrande midfielder has had pretty much all of his stats increase except for physical stat, which remains at 71.

Rulebreakers Talisca is only +2 OVR compared to his base 82-rated gold version, but he's still a decent CAM to have to hand.

Keen to add him to your squad? Let's take a look at the best solution to solving this SBC.

The SBC went live on the 27th October at 6pm BST. 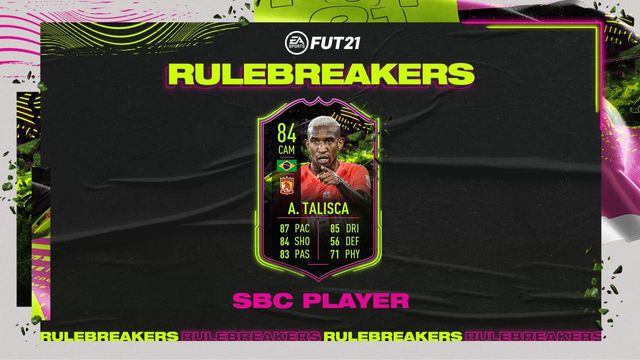 To get this Rulebreakers Anderson Talisca card you will need to submit one 85-rated squad with 60 chemistry minimum and at least one Brazilian player.

Looking online, it looks as though players can expect to pay somewhere between 60,000 - 70,000 coins to complete this SBC.

According to the experts at FUTBIN, the cheapest solution to solve this SBC requires the following squad: