Bungie has announced a full content roadmap for Beyond Light, Destiny 2's next expansion.

Alongside what to expect in the expansion content is a wealth of information about content coming for all players of the game, even those in the free-to-play Destiny: New Light mode.

Check out the full roadmap infographic below: 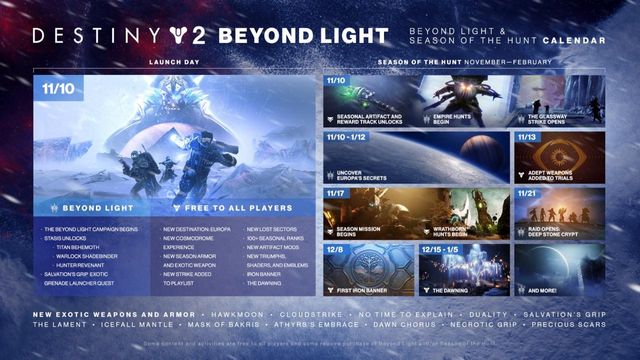 For Beyond Light, players can look forward to a new campaign, as well as Stasis subclasses, and the Salvation's Grip Exotic Grenade Launcher.

All players will be able to visit new destination Europa, while a new Cosmodrome tutorial will introduce newcomers.

Then there's the usual suite of weapons and armour to collect and triumphs to complete, as well as a new strike known as The Glassway.

The Seasonal Artifact also arrives for players on November 10, as well as a new activity called Empire Hunts.

Bungie has also mentioned Season Missions, Wrathborn Hunts, and Europa's Secrets, which we'd expect to hear more about in the weeks to come.

The new raid, Deep Stone Crypt, opens on November 21, while players can expect the usual Iron Banner and Dawning festivities in December.

For more on Destiny 2, be sure to check out our rundown of all of the new exotic weapons we know about coming in Beyond Light here.