Destiny 2 Darkness In The Light Quest: How To Get Malfeasance

Beyond Light is on the way, but you’ve still got time to prepare by earning some of the best loot. One amazing gun you might want to unlock while you’re waiting is the Malfeasance, a hand cannon from the Forsaken expansion.

Destiny 2: What is Malfeasance

The Malfeasance is a brilliant weapon for Gambit. 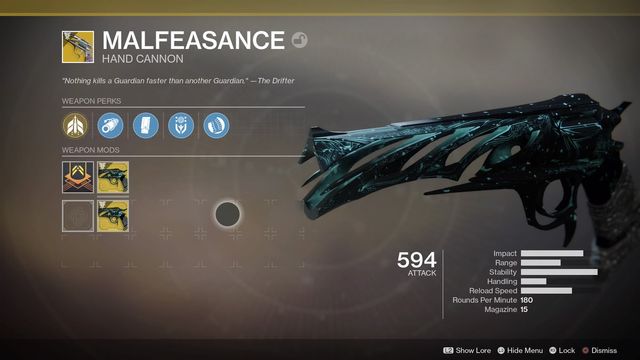 This is absolutely a weapon worth having for the Gambit modes.

Here’s how you unlock it.

How To Get The Malfeasance Quest in Destiny 2

The first step will be to access the quest itself.

For this, you’ll have to head to one of the game’s best modes — Gambit.

Play Gambit until you and your teammates manage to best an Ascendant Primeval Servitor. (Try saying that five times fast!)

A quick note: According to Destinypedia, the special Ascendant Primeval Servitor won’t spawn in Gambit Prime.

You’ll want to stick to the standard Gambit mode for the duration of this quest to avoid wasting time. Speaking from firsthand experience, it could take a while before you encounter the Servitor.

Once you’ve slain this rare boss, speak to Drifter and collect the quest.

Read more: Ace of Spades Destiny 2 quest: How to get the exotic gun

The next steps for the quest are as follows:

Yellow-bar Taken enemies can be found in multiple Taken public events and missions, but the Dreaming City has quite a few — and is also home to the “Corrupted” strike — so try heading there.

Next, grab a fireteam, and load into “The Corrupted.”

Below’s a handy video guide for any lone-wolf players looking to solo it.

Next up, you’ll be headed into Gambit.

The first challenge is fairly simple; just play the mode as intended. The final part — defeating 25 Guardians — will be tough, but with a little persistence, you can do it.

Every time you hear Drifter announce that the portal’s open, head in and try to defeat players on the opposing team.

They should be easy enough to find; you’ll see their nametags marked in red, along with a number denoting how many motes they’re carrying. With a little luck and some skill, you should be able to get a full wipe.

Failing that, just hope for your teammates to do it a few times over a number of matches.

Finish the quest by talking to Drifter, and enjoy your new weapon.