FIFA 21 TOTW 5 REVEALED: Prediction, Release Date, Squad Countdown, How To Get In-Forms And Everything You Need To Know

TOTW 5 arrives this Wednesday in packs in FUT 21!

You can see the full squad below, with the official player's names and stats also included: 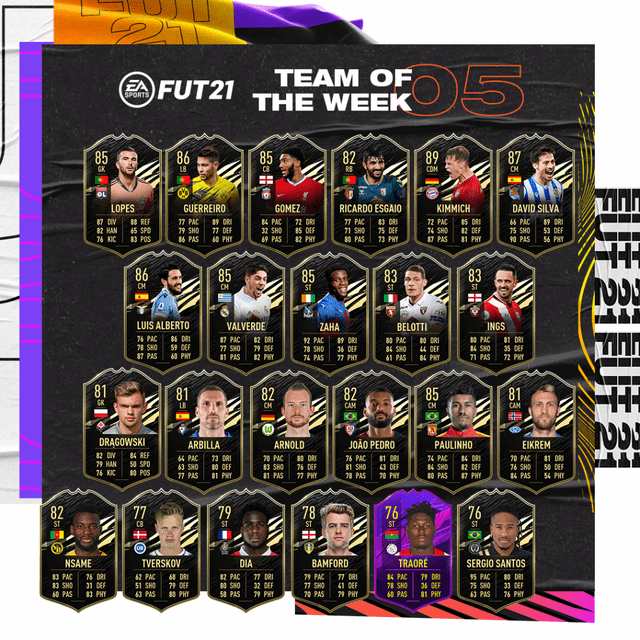 As fans will no doubt know, the team of the week will introduce several special upgraded In-Form FUT cards, in recognition of players superiors performances in the real world fixtures these past seven days.

In the case of last week, TOTW 4 saw the release of several major upgrades including Ederson, Marcus Rashford and an upgrade to OTW Timo Werner.

Will TOTW 5 be better? We can only hope.

FIFA 21's fifth TOTW will be revealed on the 28th October at 6pm BST.

They will then be removed from packs at 5.59pm BST the following week (4th November) in time for FIFA 21 TOTW 6.

Some online influential FUT traders on Twitter are suggesting that some of the new TOTW players have leaked online early; although you'd need to take it all with a pinch of salt.

If you want to remain clueless until EA's announcement later, then read on for our predictions.

Otherwise, click the link below for all the details on these potential TOTW 5 leaks: 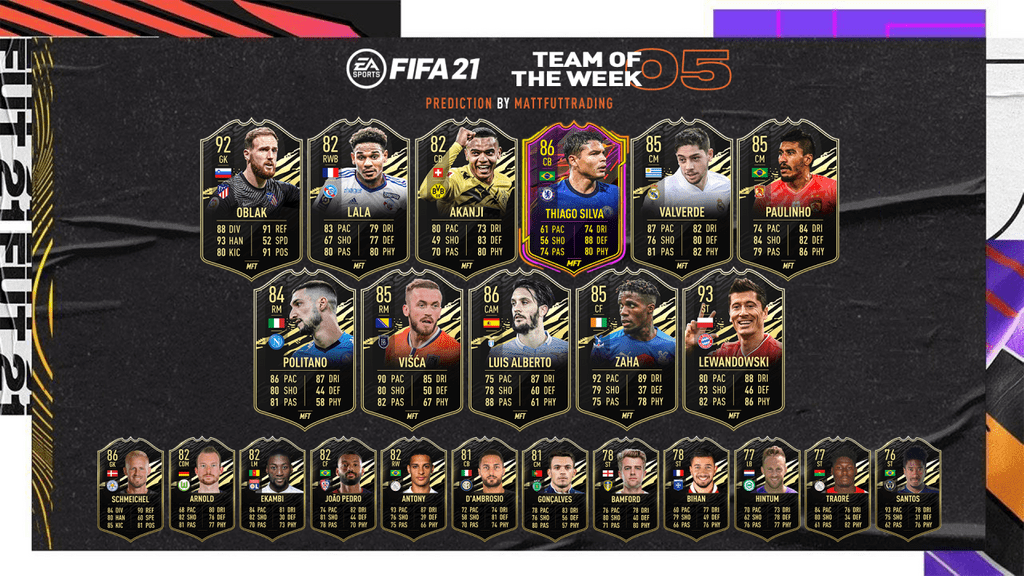 Team of the Week 5 Prediction

TOTW 05 looks set to be a solid selection of players, with some truly awesome additions to the FUT 21 meta.

Oblak has yet again earned a spot in our TOTW Prediction, picking up a MOTM and Clean Sheet performance in a 2-0 home win over Real Betis. After missing out last week, he should get in this week.

The fan favourite from FUT 19 should be set for an IF in FUT 21, after securing a goal and clean sheet in a 3-0 away win against Stade Brestois.

It was the weekend of goalscoring CBs for Dortmund, with Akanji netting 1 goal, while keeping a clean sheet and earning the MOTM award for Dortmund in their 3-0 win over Schalke.

A potential OTW upgrade for Thiago Silva, after keeping a clean sheet against Manchester United at the weekend with 6 clearances, 2 blocks, 2 tackles and 2 interceptions.

An IF for Real Madrid seems very likely this week given their 3-1 away win in El Clasico. With Ramos receiving a recent IF, goalscorer Valverde could be an awesome new addition into midfield.

An emphatic 5-0 victory for Guangzhou in which Paulinho earned 1 goal and 2 assists should earn him the TOTW item this week.

2 assists for Politano this week in a 2-1 win may snag him a spot in the TOTW 05 starting 11 with somewhat limited attacking options.

Visca’s 2 goals and 1 assist in Basaksehir’s 5-1 home win over Antalyaspor will certainly see him making the TOTW this week.

Despite only scoring 1 goal, Luis Alberto put in a MOTM performance in Lazio’s 2-1 home win over Bologna, and could take the attacking midfield spot in this TOTW.

1 goal and 1 assist for Zaha in Crystal Palace’s 2-1 away win over Fulham should be enough to secure him an IF card with a relatively low scoring week for top tier attackers.

We’re only 5 weeks into FUT 21, and already Lewandowski is getting into the mid 90s. A hat-trick for him this week should see him earn his 2nd IF of FUT 21, taking him up to a 93 rating.