Walking in a Fornite Wonderland!

Chapter 2 Season 5 is looming ever closer, and while we are still in the midst of the Fornitemares update for Halloween, Winterfest won’t be far away!

Here is a breakdown of all the leaks and information we have so far, be sure to check back regularly to catch any updates.

If Fortnitemares 2020 is anything to go by Winterfest 2020 looks set to be the best iteration yet!

Winterfest 2020: Everything We Know

Right now we don’t have a release date for Winterfest 2020, but last year it came out December 18.

We’d expect something similar this year, perhaps a little earlier if anything, as later that the 18th won’t give you much time to play before Christmas itself!

Is Frosty about to become a Fortnite Boss?

After the Marvel crossover, the idea isn’t impossible but it looks like an upcoming NPC is going to be more friend than foe.

A Snowman NPC has been found in the game’s files according to @HYPEX on Twitter. 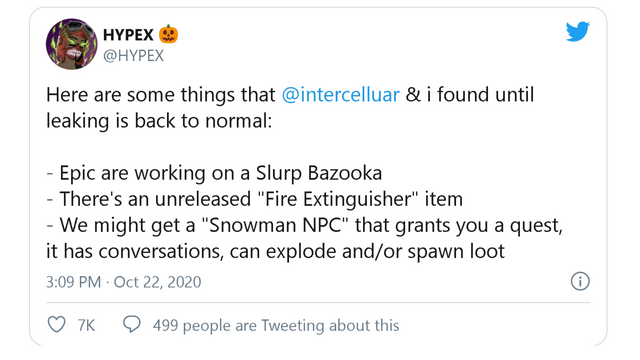 What is unique about this NPC, at least compared to others in Battle Royale so far, is that they have proper voice lines programmed in.

According to another HYPEX Tweet, they seem to suggest the snowman will give quests and grant players with loot. 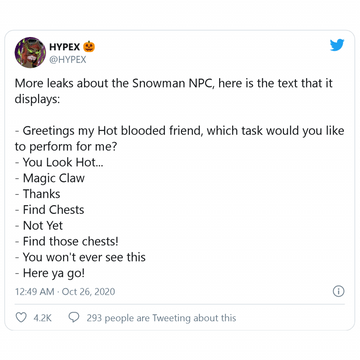 This could even happen mid-game! Based on the leaks the Snowman is currently primed to say the following voice lines:

We’re both excited and confused by this move, but perhaps it will link to Fortnitemares style LTM, which changes up something core about the game to celebrate the Holidays.

We’ll just have to wait and see!

No new skins announced yet, but with a snowman NPC on the way perhaps we’ll see some inspired by them!

We’ll probably see a return of the Sneaky Snowman item, or something like it to celebrate the winter season. 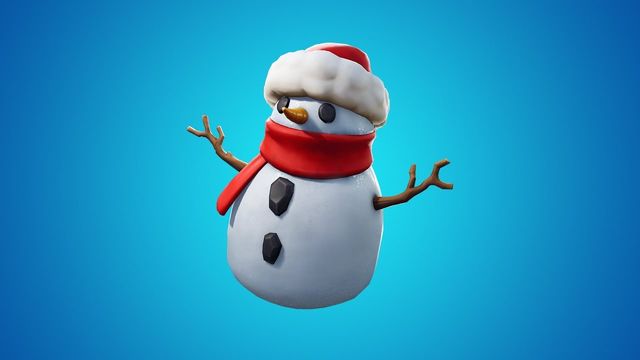 While not always the most practical, it was always a laugh to try and hide in these items.

We may also get more of the Presents! item, definitely one of our favourites to use!

The Winterfest event last year was fantastic, giving you so many cosmetics and gifts that we still use like the Millenium Falcon Glider!

Hopefully, we’ll get something like that again this year.