We are now underway with the third week of FNCS Qualifiers for Season 4.

This is now the part of the competition where if you have not already qualified, you are giving it your all to make it into Heats.

However, the main talking point throughout the weekend has been the on-going feud between David "aqua" Wang and some of the world's most popular players.

Before we dive into the background information, it appears Aqua has now been banned from partaking in competitive events for 14 days.

Taking to Twitter to post a screenshot of his ban, the reason Epic stated for the ban was 'Other'.

This appears to be a very wide category, but this also confirms he will more than likely miss the FNCS Heats. 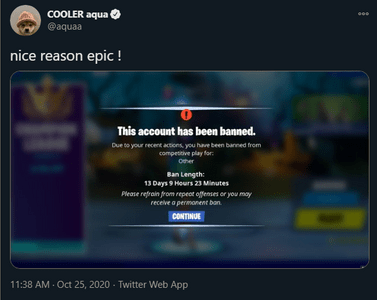 This all started during the Semi-Finals of the FNCS Qualifiers over the weekend.

Professional players for NRG, Benjy 'Benjyfishy' Fish, and Martin 'MrSavage' Foss Anderson were streaming the event and happen to land at Doom's Domain, the same POI that Aqua and his trio prefer to land at.

The feud took a turn for the worse when the pair claimed Aqua and his trio were stream sniping the pair.

As well it has believed that Aqua has been banned for leaving the game when he was being 'shaken down' by Benjy's trio.

This is a bannable offense, but we have not seen it enforced in the past, and it appears Aqua is the first big name to take a ban for this.

Since Aqua was notified of his ban, he has been calling out other professional players who have not been banned from leaving the game during a shakedown.

One, in particular, includes French professional player Skite, who was initially called out by E11 Tayson; but the latter has now taken down their tweet.

It is unknown if Epic is going to put out an official statement regarding Aqua's ban, or if Aqua is going to receive any more communication from Epic regarding this ban.