How are your driving skills?

Apex Legends Season 7 is arriving earlier than we first expected.

The brand new season will release alongside the game's steam launch on November 4th.

Season 7 is set to bring a wealth of new content including a new legend.

On top of this, a new leak has suggested the new season may bring vehicles to the battle royale title.

Let's check out what we know so far.

In the trailer, we see a bunch of stuff from the new map, Olympus to the next legend, Horizon.

One thing that's caught our eye is the hovering vehicles.

As you can see below data miners suspected vehicles were coming but now it looks like a reality.

Take a look for yourself, the newest character to join the roster, Horizon, is revealed by sliding in on the said vehicles.

Are Vehicles Coming To Apex Legends?

A recent datamining leak has revealed vehicles could be coming to the game in Season 7.

The animations were added to the game in patch 6.1. 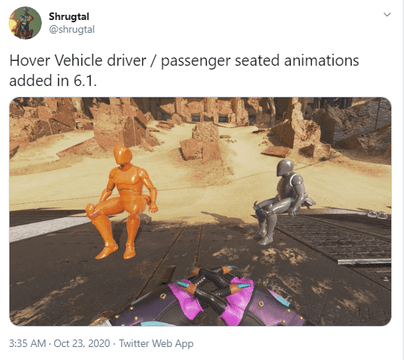 News of vehicles being added into Apex Legends has sparked questions on whether the maps are designed for them.

A number of Apex players have pointed out that Worlds Edge and Kings Canyon are significantly smaller than other Battle Royale maps.

This obviously begs the question on whether vehicles are suitable for Apex Legends.

Some fans have theorised the vehicles may operate on rails like the in-game train.

Of course, there's always the potential that a new map is added to the game.

This would open up possibilities for open-world vehicle travel on a bigger map.

Either way, the addition of the animations confirms Respawn is working on some form of vehicle travel.

Let's hope we find out the details of the update as soon as possible.

Do you need a catch up on the Season 7 patch notes?

Check out our dedicated article that covers all the changes here.