Plenty of players got involved in the beta

The release of Call of Duty: Black Ops Cold War is right around the corner.

The latest instalment in the popular first-person shooter (FPS) franchise is a direct sequel to the very first Black Ops title and takes players back to the height of the Cold War.

Prior to its November 13th release, players across all platforms got the opportunity to get their hands on the multiplayer over two beta weekends.

The beta gave players a chance to play a small slice of what the full multiplayer experience has to offer.

It appears that the beta proved extremely popular amongst the community.

According to Call of Duty publishers Activision, the beta for Black Ops Cold War was the most downloaded Call of Duty beta in the history of the storied franchise. 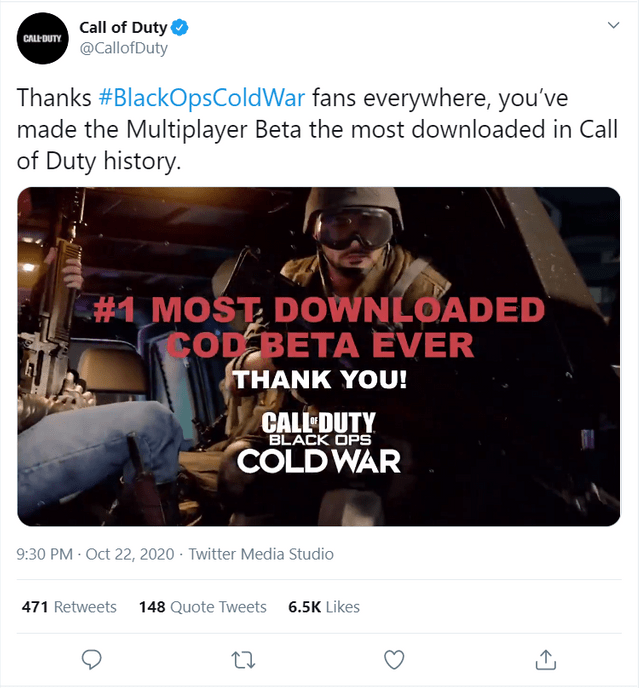 It was originally thought that the brief taster of multiplayer action was going to end on October 19th.

It was extended by an additional 24 hours after players managed to crack a code which appeared on the infamous PawnTakesPawn website.

It’s worth noting that Activision clamied the beta for the 2019 reboot of Modern Warfare was the biggest in franchise history, so it must have taken a lot for Black Ops Cold War to surpass this total!

The Future Is Bright

Although exact figures surrounding player numbers were not disclosed, the past 12 months have been great for the Call of Duty community.

The introduction of cross-platform play bought the community together in a way that was unimaginable just a few years before.

The release of Warzone has taken the battle royale genre by storm. The first and only free-to-play Call of Duty title saw millions of players dropping into Verdansk getting their fix of classic CoD gameplay and the thrill of a battle royale game.

Hot off the back of another successful beta, the future of the Call of Duty franchise looks to be bright.

Players have had a solid title to play alongside Warzone and with the release of Black Ops Cold War close to release, it looks like fans are in for another great year of Call of Duty!