References to the classic map have been discovered.

The release of Call of Duty: Black Ops Cold War is fast approaching.

The latest instalment in the popular Call of Duty franchise is making a return to the Cold War following on from the events of the very first Black Ops game.

With the November 13th release moving ever-closer, Treyarch has revealed plenty of information regarding innovative features, gameplay changes, maps, game modes and so much more.

Despite all this information, there has been little to no information surrounding an iconic Black Ops multiplayer map.

Throughout the Black Ops series, various iterations of Nuketown have appeared and are often one of the most popular maps in the game.

Treyarch has yet to reveal any possibility of a Cold War version of Nuketown being present in Black Ops Cold War, but there have been references to the map in other elements of the game.

Content creator @imFiremonkey has uncovered a reference to a Nuketown reticle for weapon scopes. 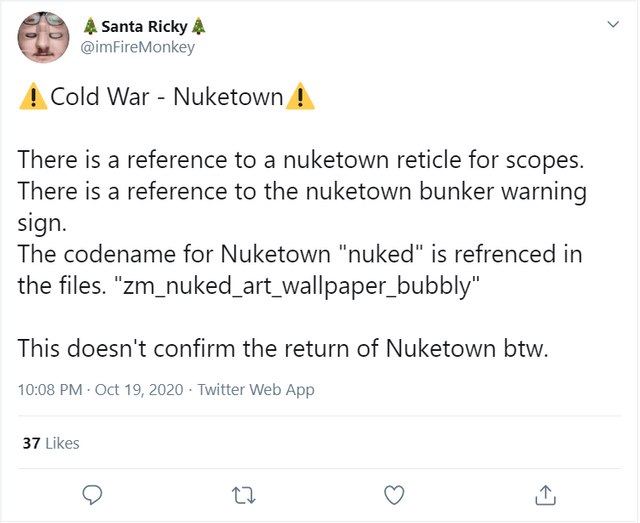 The file, named “zm_nuked_art_wallpaper_bubbly”, only makes reference to the reticle but there is still no sign of a Nuketown map being included in Black Ops Cold War.

While references to the map are a positive sign, a lack of information surrounding the presence of an actual map will be a disappointment to many fans of the Black Ops series.

Given the small nature of Nuketown, does this mean that we may never see Nuketown arrive in Black Ops Cold War?!

If this is the case, let’s hope that the legendary Black Ops map will make an appearance during the Black Ops Cold War game cycle.

Perhaps it would make a fun 24/7 playlist for a Double XP weekend?