The release of Call of Duty: Black Ops Cold War is right around the corner!

With just a few weeks until the latest instalment in the franchise is available, hype is reaching fever pitch levels as Call of Duty braces for a return to the Cold War.

Players that have played the alpha and beta have already got a small glimpse as to what can be expected when the full game is released on November 13th.

During the second weekend of the beta, data miners have been busy scanning the files to see if they can find any clues potentially revealing any new features coming to the game.

One data miner has found new modes coming to Black Ops Cold War and some fan-favourites making their return.

With the vast majority of the Black Ops Cold War map pool featuring 6v6 and 12v12 variations, the likelihood of classic 6v6 modes doubling in size to cater for the larger maps is extremely high.

Notable leaker @Okami13_ has revealed that 12v12 Team Deathmatch and Kill Confirmed modes will be available for those wanting even more action in their multiplayer experience. 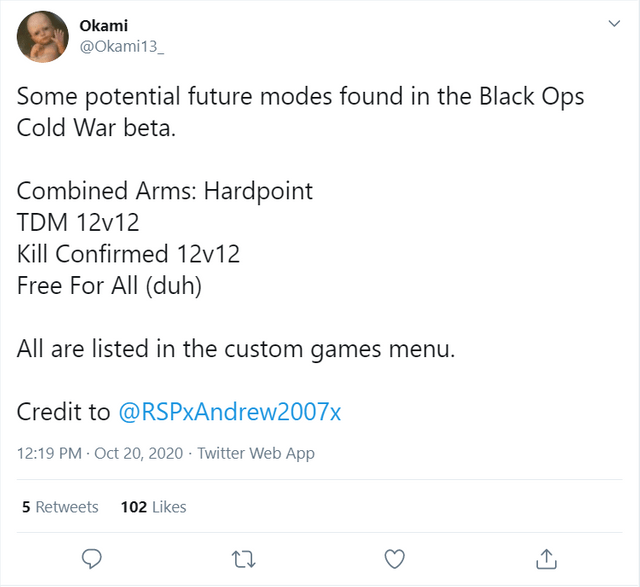 Another mode revealed builds on the Combined Arms modes which made their debuts during alpha and beta weekends.

Combined Arms: Hardpoint looks to be arriving to the game and will likely feature big team battles fighting for control of Hardpoint hills in the same fashion as the 6v6 mode.

Alongside plenty of new modes arriving to the game, there is one particular mode that is making its return.

Free For All is a staple mode of the Call of Duty franchise, always featuring as one of the core game modes for players.

As always, the objective of Free For All is simple. The player to reach a specific number of kills first is crowned the winner.

Free For All will join the likes of Team Deathmatch, Domination, and Search & Destroy as one of the modes that Call of Duty has always featured.