The issue of 'SBMM' - aka skill-based matchmaking for those who don't know - is a rather thorny topic in the videogame community and we don't think is going to blow over anytime soon.

At a really basic level, it's essentially a feature intended to balance lobbies so players face other players at a similar skill level.

But for many, these systems appear flawed and when you're constantly playing with people of the same level or higher, there's little room for casual play. Hence the term “sweaty” gameplay, because you simply can't relax.

Now streaming sensation Dr Disrespect has weighed in to give his two cents on the matter, following the conclusion of Call of Duty: Black Ops Cold War's open beta this past weekend.

The Doc Weighs In

It's worth reminding readers that earlier this month, 'SBMM' was trending across Twitter as users became increasingly frustrated with the Black Ops Cold War game during PlayStation's open beta.

A few weeks on and it seems the issue isn't lost on Doc, who seemed to agree that more work needs to be done whilst speaking with streaming last week.

“Man, that SBMM, what a… what a…” he said, struggling to find the words to summarize his rage. “SBMM results in exact same fight every single time.”

“It has nothing to do with… game design,” he later added.

“Treyarch knocks it out the park… I just think it has something to do with a lot of the technical stuff… I would take that tech out.”

“I want some sheep in my lobbies,” he said. “I want a couple triple peekers. The game could like just be so much more fun. I don’t understand why they have it.” 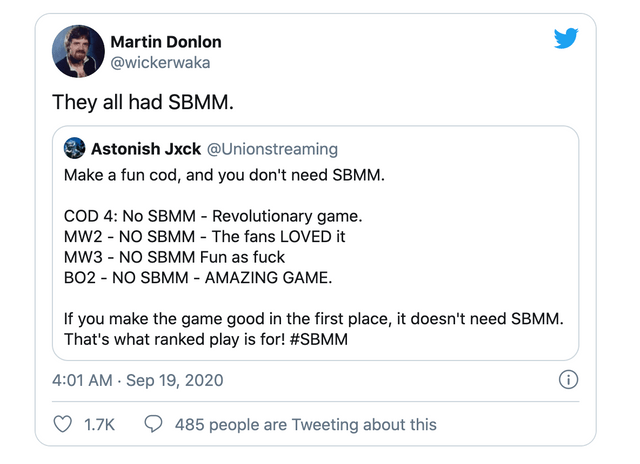 For those curious, in September, Treyarch developer Martin Donlon also waded into the conversation, whilst replying to one particularly angry user on Twitter (above).

What was partially interesting is how Donlon was able to debunk the myth that the previous Call of Duty titles did not have SBMM.

"SBMM is one of many many tuneable parameters in a matchmaking system," Donlon added. "It's funny watching people talk about it like it's a big switch that can only be turned on or off."