Is a new Branthium map on the Horizon?

As Respawn starts gearing up for Season 7 and the release of their new Legend, the Leaks and Teasers keep on coming.

This time it’s a teaser from the Apex Legends Twitter which seems to tie into a voice line from the Broken Ghost quest.

Exactly what it all means is still being deciphered by fans but it has many excited that we could be seeing a new Season 7 map alongside Horizon.

The video posted by Apex Legends Twitter account is very short and doesn’t appear to show much but Shrugtal has the answers as always.

The staticy image is hard to make out, but it appears to look like Horizon’s drone.

Additionally, the audio is not the best, but the word Branthium is definitely said.

Players may recognise the name as one from a Season 5 quest, but it hasn’t appeared elsewhere since.

We’re now fairly certain that Ash is the next Legend, but could Season 7 also introduce a new map too?

Only time will tell, but that doesn’t stop community speculation.

Branthium was first referenced in the Ash quest, Broken Ghost.

This strongly suggests Branthium is a location, rather than a person.

Shrugtal and other Apex Legends fans have been finding hints to a new map since before Season 6, so perhaps this further supports those claims. 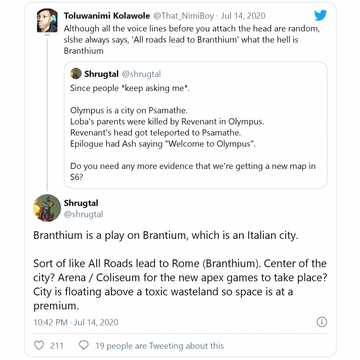 Whether Branthium is going to be the name of the map or just the in-game location the new map is situated in, we don’t yet know.

Though the latter is more likely as Olympus has been tossed around several times as the next map’s name.

Season 7 looks set to be the most exciting yet, let’s see what it brings!

Apex Legends Mirage Heirloom Guide: How To Get It And What Does It Look Like?

Apex Legends Octane Heirloom Guide: How To Get It And What Does It Look Like?

Apex Legends Caustic Heirloom Guide: How To Get It And What Does It Look Like?