Then We Can Monster Mash!

Fortnitemares content for Halloween 2020 can only be days away and we may have another peek at other plans Epic Games have for Halloween!

If leaked skin details are to be believed a Halloween concert on October 31st could be hosted in-game, and fans are excited.

Attending the concert could net you a cool variant of an upcoming Dancefloor Soldier skin, so there are plenty of reasons to start feeling the hype.

Will There Be A J Balvin Concert In Fortnite?

Fortnite has been hosting way more concerts since their Travis Scott tie in earlier this year.

With the new Party Royale mode they introduced, the in-game concert stage has been home to many different artists from all over the world.

Now J Balvin could add their name to that list if leaked Dancefloor Soldier skin details are to be believed.

According to @HYPEX on Twitter, the skin’s description says that “Dancefloor Soldier owners who take part in the Nightmare Party on October 31st will receive an exclusive J Balvin style!” 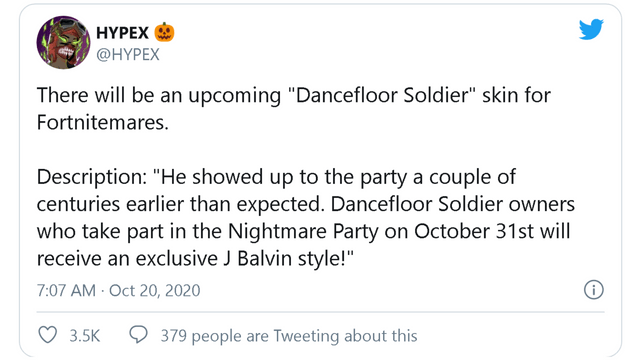 Assuming the information is real, it is highly likely the Nightmare Party will be a concert starring J Balvin.

Why else would a skin design based on him be added?

Balvin is a world-renowned Colombian singer who’s collaborated with the likes of Dua Lipa.

Balvin also has a tie-in promotion with McDonald’s right now, just like Travis Scott did, so perhaps he’ll be following in Scott’s footsteps in more ways than one.

When Is The Nightmare Party Concert?

There haven’t been any official concert announcements yet, but HYPEX is a reliable leaker and his information says 31st October.

We don’t yet have a time yet, but likely there will be a couple to account for different time zones around the world.

When Is The Dancefloor Soldier Skin Releasing?

For this one, we are less sure on a date.

Very likely on or before October 31st, and with the Nightmare party tie-in, it may be a skin we see in the Item Shop several times leading up to the date.