The inaugural season of the V10 R-League came to a thrilling conclusion as the top two teams in the table battled it out in the finale of this uniquely formatted racing series around the Yas Marina Circuit, Abu Dhabi – with Porsche24 Redline securing the title in the last race.

Williams Esports, sitting three points behind their final round opponents and league leaders Porsche24 Redline, needed to make it a clean sweep of all three races in their match up to steal the championship win.

The V10 R-League features matches played over three race formats - Head to Heads, the Relay Race and Team Race - with a point towards the league standings up for grabs in each.

Williams came out on top over Porsche in the Head to Heads with some thrilling and risky racing before holding firm in the Relay Race to pick up a second point and make sure that the final Team Race was a winner takes all finale.

It all started brilliantly for the Williams team, taking P1 and P2 at the first corner and keeping Porsche at bay until the fourth lap as contender for driver of the season, Michal Smidl, closed the gap and began to put the Williams drivers under scrutiny. 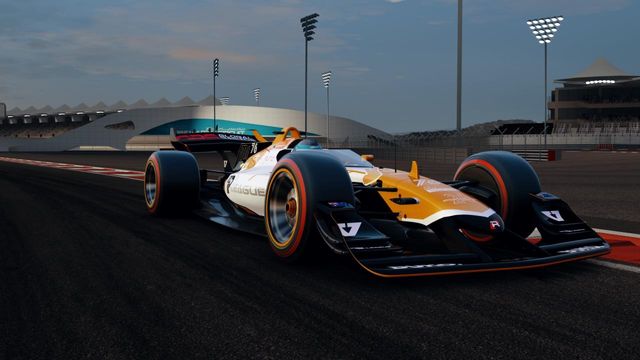 Porsche24 Redline took the win in a thrilling series

Heading into the final sector of lap four the pressure showed and Smidl and Atze Kerkhof for Porsche attacked, stealing second place with a pincer overtake, squeezing the Williams driver Nikodem Wisniewski into a spin and a collision with his own teammate, Martin Stefanko.

Smart defensive driving from Smidl and the rest of the Porsche drivers ensured that they did enough to secure the inaugural V10 R-League title.

A previous Williams pit lane violation from the Relay Race was later confirmed by the stewards to further effect the final standings and Porsche finished the season three points clear at the top.

BMW Motorsport SIM Racing Team and Red Bull Racing Esports had also faced off for third and fourth with the Red Bull team coming out on top with a 3-0 win, leapfrogging BMW in the final standings to claim the last step on the podium.

In the bottom half of the league YAS HEAT pulled off a 2-1 win over BWT Racing Point Esports but it was only enough to retain seventh in the table with Racing Point holding fifth.

JAESA Team Suzuki, finishing sixth in the standings, shared a 1-1 draw with Team Fordzilla - placed eighth overall – in an action-packed race to complete the seventh round fixtures.

All eight sim racing teams share the £100,000 prize money based on their positions, with Porsche coming away with the winning cheque for £30,000.

The Season 1 V10 R-League final standings are as below:

The final standings of the inaugural V10 series

Michal Smidl, Porsche24 Redline’s star driver, said following their win, “I really liked the whole championship. The short races were very intense and showed who can cope with the pressure. The V10 R-League format is interesting and truly unconventional in the world of sim racing. I'm glad I could be a part of the first season and I can't wait for the upcoming season. The winning feeling after we secured the championship was absolutely phenomenal.”

Team Principal of Porsche24 Redline, Diederik Kinds, said, “It has been a great season for us with fantastic results, also very tough battles. We believe we fought hard for every single point out there. We did have a comfortable lead going into the final, and we only needed one heat win to seal the deal. However, it would have been very easy to lose to Williams so we had to be switched on and do our best. Our dedication has been very strong, with our eyes always on the prize. We gave everything to win this championship.”

The inaugural season of the V10 R-League has been broadcast to millions across BT Sport, ESPN, STARZPLAY Arabia and online. Season 2 is confirmed and will return in early 2021, bigger and better.

John Clarke, CEO at Gfinity, said, “The success of the first season is largely down to the commitment of the teams and drivers to this new format. We promised drama and anyone watching the final round certainly got that. As we look ahead to Season 2 we now have a series that has been seen by millions globally. We are excited to share that a range of conversations are happening that will enable us to supersize the championship and continue Gfinity’s commitment to being the driving force of digital motorsport, one of the world’s fastest-growing sports.”

Saif Al Noaimi, ADMM Acting CEO, said, “The V10 R-League has welcomed the very best teams and drivers from around the world to compete in Series 1, creating fantastic on-track action and significant, global viewer engagement. The programme is delivering fantastic results and Series 2 will build on this success. This is testament to our strategy of working with Gfinity, in bringing together the best people to deliver best in class esports racing products.”

To find out more about the inaugural V10 R-League, visit www.v10rleague.com/. Follow all of the latest news and updates from the V10 R-League on Instagram and Twitter.

Gfinity (AIM: GFIN) is a world-leading esports business. Created by gamers for the world's 2.2 billion gamers, Gfinity has a unique understanding of this fast-growing global community. It uses this expertise both to provide advisory services and to design, develop and deliver unparalleled experiences and winning strategies for game publishers, sports rights holders, commercial partners and media companies.

Gfinity connects its partners with the esports community in authentic and innovative ways. This consists of on and off-line competitions and industry-leading content production. Relationships include EA SPORTS, Activision Blizzard, F1 Esports Series and the Forza Racing Championship.

Gfinity connects directly with competitive gaming consumers through its growing community of gamers on its own platforms: Gfinityesports, RealSport101 and StealthOptional.

All Gfinity services are underpinned by the company's proprietary technology platform delivering a level playing field for all competitors and supporting scalable multi-format leagues, ladders and knockout competitions.

ADMM has promoted and delivered globally significant events, including the Formula 1 Etihad Airways Grand Prix, alongside over 400 events a year across motorsports, health and fitness, entertainment and major corporate conferences. The company also delivers a significant programme of motorsport retail experiences for business and consumer audiences at Yas Marina Circuit across the year. This combined experience means that ADMM has a region-leading team with expertise in event marketing, communications, promotions and project management. Such talent firmly positions ADMM as a leader in sports management.

The company is now seeking to diversify into activities and strategic ventures beyond Yas Marina Circuit in order to build towards a broader long-term vision aligned with its partners and stakeholders in Abu Dhabi.