Black Ops Cold War: Leakers Are Being Trolled By Treyarch

Leakers are often seen as the vigilante of video games. Often deep-diving into the files of games to uncover its hidden secrets.

While some are happy to hear news before it's officially released, others are less enthusiastic about them spoiling the fun.

Treyarch has hit back and leakers by actively trolling them with the latest build of the Black Ops Cold War beta.

With Black Ops Cold War launching on the 13th November, players are excited to see what else Treyarch have in-store for players.

The community has experienced the beta over the past two weekends and have a good idea of what's coming up for the next year.

While skill-based matchmaking seems to be the topic of discussion for everyone with a Twitter account, there are some funnier sides to the beta.

Dataminers are now being trolled by the developers with one of the most classic pranks in internet history: they're being Rick Rolled.

That's right, leakers are being done by the oldest trick in the book.

If you're unsure what being 'Rick Rolled' is, usually users will provide a mysterious link and a click-bait caption to encourage people to click through to Rick Astley's 'Never Gonna Give You Up'.

Keeping with the Cold War theme, the song released in 1987 - the same period in which the game is set.

So how were they being tricked? A number of files were coupled with a mysterious link, which took them to the YouTube video, including God Mode, Loot Boxes and a Season 1 overview. 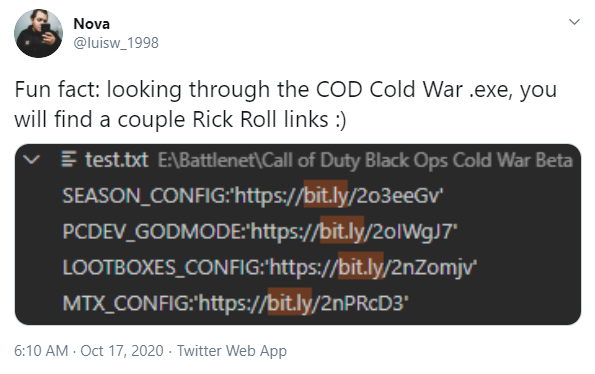 Chalk one up for the developers. I'm sure there were a few red-faced leakers after this one came to light.

Treyarch's community-based approach to this year's Call of Duty has been fantastic and their transparency is a breath of fresh air.