Master the KSP 45 with the ultimate loadout.

The KSP 45 is one of the brand-new, and more unique, weapons that has been introduced to the Black Ops Cold War arsenal.

This sub-machine gun stands out from the rest in this particular category thanks to its burst-fire mechanism and extremely high damage in medium-range encounters.

Eagle-eyed players may see some resemblances with the iconic UMP 45 SMG from previous titles. This weapon appears to be an original creation by Treyarch.

The Gunsmith enables players to create a diverse range of attachment combinations to suit their style of play, but which is the ultimate KSP 45 loadout?

Armed with impressive speed and firepower statistics, the KSP 45 is arguably one of the most versatile pieces of weaponry on the game.

Thanks to the high damage output, it dominates in close-quarters situations and with a bit of trigger discipline, it can easily contend with some assault rifles at longer distances.

The time between bursts is minimal, enabling the KSP 45 to be equally as effective as its fully-automatic counterparts in the SMG category.

Regardless of attachment combination, recoil is at its minimum, making it extremely easy for players of all abilities to pick up the KSP 45 and make an impact on the battlefield.

The choice of muzzle brake and front grip reduce recoil to minimal levels while the takedown barrel increases effective damage range by 25%, further increasing its versatility at long-distance.

The tight grip and wire stock allow players to emphasise their domination of the close-range game by increasing aiming speed and aim flinch stability which gives you an increased focus when taking fire from an opponent. 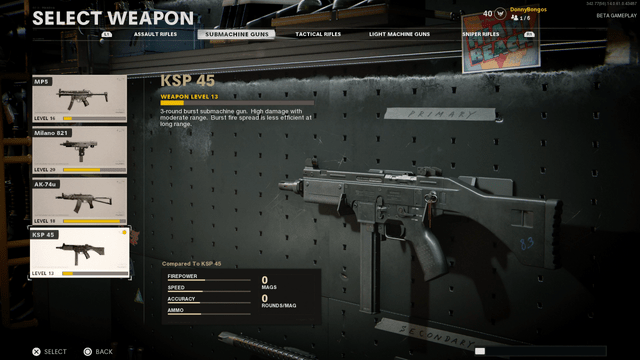 If you get caught out thanks to a well-timed slide over the top of your position, quickly swapping to this fully-equipped Hauer 77 is the perfect tool to eliminate them before they have time to turn around and attempt to take you out.

Often a one-shot kill in close quarters, the pump-action shotgun is the perfect weapon to further assert your authority when up close and personal with the enemy.

It’s hard to go wrong with selecting a frag grenade as your lethal piece of equipment. There’s no better feeling when you score a kill after launching a frag across the map, much to the surprise of the enemy!

When using the KSP 45, it’s more than likely that you will be in areas of the map where the majority of the action takes place.

By equipping the stimshot, it gives you a quick boost of health which is perfect when you are on the verge of succumbing to an opponent in the heat of battle.

This loadout offers little to no resistance to any air-based scorestreaks such as the Attack Helicopter and the Chopper Gunner.

Place a SAM Turret in an open area of the map to deal damage to any streaks in the sky.

By equipping this wildcard, you can select a total of eight attachments to equip to the KSP 45.

With a fully-equipped KSP 45 in your hands, the potential to end the game at the top of the scoreboard is extremely high!