The Black Ops Cold War beta has now been opened up to players all over the world regardless if they pre-ordered the game or not.

The beta has been one of the best in quite some time and it was a real shame that it was set to end so soon.

However, Treyarch has gifted fans a little something special.

Tweeted out last night by the official Call of Duty Twitter account, it has now been confirmed that the Black Ops Cold War beta will be extended until October 20th at 10:00 am PT.

Thanks to the code-breaking efforts of our incredible community, an extra day of the #BlackOpsColdWar Beta has been unlocked! 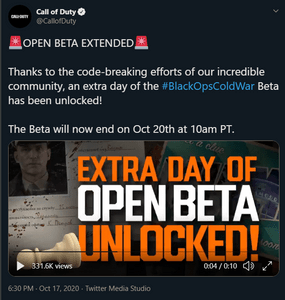 Since the beta has been extended players are going to have more time to test out the new content that was added yesterday.

If you missed what was added, below is a summary of yesterday's patch notes!

Let us know how you are finding the Black Ops Cold War beta!