Trouble On The Pitch

Fifa 21's release has gotten off to a flying start, with fans all over the world enjoying the new mechanics this year.

Completing SBC's has been a hit this year, but that is not to say all is perfect with Fifa this year.

FUT Champions players have had an ample amount of questions with few answers up until this point.

Now, EA has answered the most frequently asked questions many FUT Champions players have been asking; and they are not the responses many were hoping for.

The thread was more so concerned with how FUT Champions matches would contribute to your Division Rivals Weekly Score, as there was a bit of confusion regarding this topic.

You can check out the whole Twitter thread from EA here, but below are some of the key points from it.

In the case above, each Weekend League match consumes one of the maximum 30 Division Rivals matches that count for Weekly Score progress. 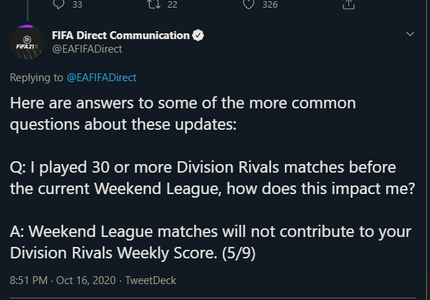 Some fans were not happy with EA after this Twitter thread was posted.

What is wrong with you people? Why cant you make it so WL doesn't count towards rival score at all. That will be fair for people who dont play WL at all and also for the ones who do play as their rival games dont get counted. Its not that difficult EA! wow

While Azuremooncity stated that it was the worst decision EA has ever made!

Probably the worst decision EA have ever made. And there have been a lot. Literally killed their game in one go. Desperately desperately trying to entice people into buying fifa points and bumming off casual players again. I fear this is the final nail in the coffin for fifa now

What do you think of this hot topic within the Fifa community at the moment? Good or bad decision/comments from EA?