FIFA 21: Why Has FUT Champions Weekend League Been Delayed?

FUT Champions has been delayed...

The first FUT Champions weekend league of FIFA 21 should be underway, but it unfortunately seems that's not the case.

Many FIFA fans woke up this morning eager to participate in the FUT Champions event that occurs every weekend; this weekend being the first of the new season.

But why has this been delayed?

Why Has FUT Champions Been Delayed?

"Due to unforeseen circumstances, the upcoming FUT Champions Weekend League has been delayed by 24 hours. Check in-game for the revised schedule. Furthermore, this Weekend League will be extended for 24 hours in order to accommodate the delayed start time." 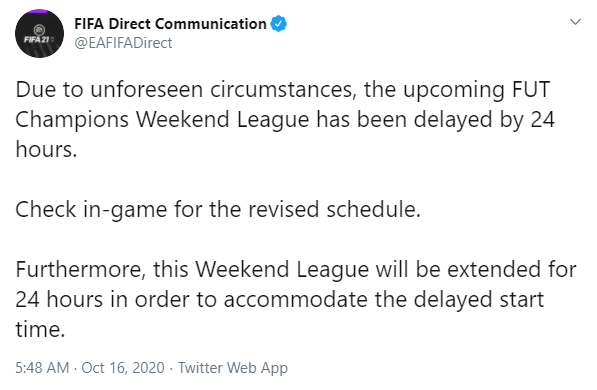 It's not the first time the weekend league has been delayed and it's something that players are used to.

However, it's hard to ignore the disappointment as fans have waited two weeks to finally get their chance to play.

So why was it delayed? It's unclear why exactly it was delayed, but it's likely due to a technical fault within the game or distribution process from EA.

Players are speculating it is a connection stability issue that is causing the delay.

It's important to remember that this game was largely produced during the COVID-19 pandemic, with many employees working remotely.

While the game seems to be in a good place, there are no doubt going to be some teething issues and faults along the way.

When Will FUT Champions Start?

FUT Champions will now start at 8am BST on the 17th October and run until Tuesday at 8am BST.

Everyone that has entered the competition for this weekend will be refunded their 2000 points - so even if you don't play all of your games, you'll get to enter the next one for free!

With Ones To Watch team 2 going live tonight, it could be a chance to make any final changes to your squad!