FIFA 21: Best Formations, Tactics And Instructions To Use In Ultimate Team And FUT Champions

Looking to play Weekend League and get the best finish, check out the best formations, tactics and instructions for FUT 21!

With the FUT Champions Weekend League available in FIFA 21 Ultimate Team each weekend, players will undoubtedly want to earn the best rewards possible.

To do that, you'll want to play to your strengths, and not all formations are created equally.

Here are the best.

Here are 5 formations that we’d recommend trying out this year in FUT 21!

While 3 at the back formations in previous years have been somewhat underappreciated, the 352 this year is, without doubt, a top-level formation that offers everything from defensive solidity to attacking options.

When utilising the wingers on defence as a back 5, or as attacking threats out wide, you can create overloads in fantastic positions on the attack, and with 5 central players to build from, quick, tiki-taka passing is a real possibility with this system.

The only downside is that you’re left exposed to counter attacks from wide, but if you’re a capable manual defender, you’ll be able to track runs and cut out attacks with ease. 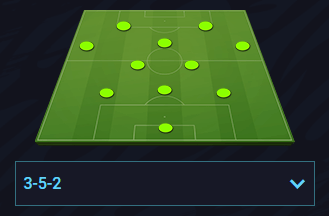 The 41212 has been a staple formation for a number of years now, is a firm favourite for players that like to attack quickly with intricate passing moves between their front 3.

This year, with pace and through balls being such a key factor, having a fast front 3 that can quickly link together moves, while being supported by 2 CMs is really effective, allowing for quick, counter-attacking moves.

On the defensive end, having a solid back 4 base will help defend against counter-attacks, with a CDM in there designed predominantly to break up attacking moves. 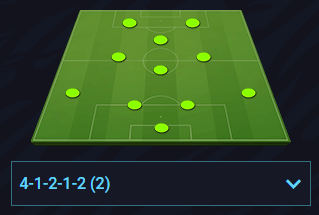 Read More: FIFA 21: FUT Champions Weekend League Tips: How To Get The Best Rewards, How To Redeem Entry, Best Times To Play & More

The fan favourite formation from FIFA 20 returns this year, and is just as good as years past.

With everything you need on the attack, from 4 attackers that can interchange and stretch the play, to 2 CDMs that can win the ball back high or sit in and create a wall of defence, plus the strong back 4 base, the 4231 is a jack of all trades system.

Making sure to have pace in wide areas will be key here, allowing you to stretch the play with your wide CAMs, before recycling it into more central areas where your CAM and ST will be situated.

On the defensive third, utilising your CDMs to cut passing lanes is a very effective means of winning the ball back, before countering with your 4 attacking players.

While the 442 may look like the boring, default, run of the mill formation, it simply cannot be ignored.

When utilising the CMs in attack, having 4 players centrally in a square formation allows for a number of various passing moves, and when coupled with the attacking threat of two extra wide players getting forward, the 442 is a deadly system to use on the offensive end.

Defensively, having 2 banks of 4 can be very effective in slowing and defending your goal, utilising the 2 central midfielders in pressing ball carriers, winning back the ball and initiating counter attacks.

The 4222 is very similar to the 442 when setting up, however it just gives players a little more of an attacking threat in the wide areas with the wide players playing a little more advanced.

Also very similar to the 4231, the 4222 allows for a 2 striker formation, which can be useful when starting quick passing attacks, as well as giving 2 options for through balls on the attacking end.

Defensively, the formation plays very much like a 4231 and 442, with a backline of 4 and 2 holding midfielders sitting just in front, however going forward, having the 2 wide CAMs as outlets, as well as 2 STs makes for a far more counter-attacking system once the ball is won back.

While there are a load of different defensive and offensive tactics to use in your FUT team, there are definitely a number of things you should get to grips with when selecting the way to play.

Currently, in FUT 21 there are 4 defensive tactics, not including the preset Balanced system. These include Pressure On Heavy Touch, Press After Possession Loss, Constant Pressure and the infamous Drop Back.

When it comes to selecting these tactics, it’s good to have a range applied to your various Ultra Defending, Defending, Balanced, Attacking and Ultra Attacking Presets.

For most of the game, running a Pressure On Heavy Touch or Press After Possession Loss based tactic is a very good way to go, allowing you to press high up the pitch and win the ball back with consistency. While many will go for the familiar Drop Back tactic to defend deep, defending from the front can catch players off guard and create more goal-scoring chances.

Currently, in FUT 21 there are 3 offensive tactics, not including the preset Balanced system. These include Long Ball, Fast Build Up and Possession.

From what we’ve played currently, a Balanced system is typically advised, as this will give you a well rounded attacking build-up that comprises most of the 3 tactics.

Long Ball we’ve found typically hurts players in the build-up, as strikers always tend to be on the last line of defence.

Fast Build-up can be very effective if you’re comfortable in possession and can move the ball around quickly, however, if you lose possession you’re open for a counter-attack.

Finally, Possession is a good way to go if you’re finding passing options difficult to come by, however, you should know that it may take more time to break down a defence with fewer runners in behind.

Obviously, there are tonnes of instructions you can apply to individual players that vary across all the different formations, but here are some general tips and tricks to set up your squad!

While there’s not too much you can do with GKs, having Comes for Crosses on can be useful, especially for corners.

Once again, not too much you’re going to want to do on this front, but having to Stay Back While Attacking on will be beneficial in defending against counter-attacks.

There’s only a couple of instructions you’ll be able to apply here, and for the most part, you’ll want to just keep these as default.

Depending on your playstyle, it’s useful to have your CDMs on either Balanced or Stay Back While Attacking so they’re in a position to help defend counters. Also, having Cover Center on instead of Cover Wings will help defend against those counter-attacks.

Assuming these are more attacking roles, you can change these around as you wish. If you’re looking for more attack minded players, having Stay Forward can be useful, however if you want a more defensive approach or a constant outlet pass, having these on balanced will benefit you. Also, if you’ve got CMs that you want to have more attacking prowess, having Get Into The Box For Crosses is a great addition, allowing for late runs to be made from deep.

With wingers, a lot of pros like to have Get In Behind on more often than not, with either Stay Forward or Balanced attacking support. This will allow your wingers to be more of a threat, running in behind and stretching teams. Having Balanced Width on as well will help keep them wide but get them involved in the build up play.

When it comes to strikers, the general instructions are pretty consistent, with Stay Forward, Stay Central and Get In Behind being the ones to make sure you have applied. This will keep your strikers high up the pitch in central areas, ready to break the defensive line with attacking runs.

Don't Miss Out: Get your FIFA 21 Ultimate Points right here on Amazon for all platforms!