Valorant Icebox Guide: Map Layout, Tips And Tricks, Callouts, Angles And Everything You Need To Know

Here are the need to knows of Valorant's Icebox

Valorant’s Act 3 is out, and players are out playing on Icebox, the game’s new map currently in beta phase.

Riot released Icebox with the full intention of players trying to figure out what works with Icebox and ironing out its kinks for two weeks.

G2 Esports has already jumped right in with their breakdown and tips for Icebox, and we are giving our insight into the brand-new map.

Icebox brings a lot to the table with ziplines, jumping techniques, new angles, and more. We are here to help you work out some of the best things about Icebox with our tips, tricks and guide for Icebox in its current form.

Icebox is a map that has a huge mix of gameplay designs. A site is a warehouse with different elevations and tracks for long-range flights.

On the other hand, B site is a close skirmish with walls, boxes, containers, and buildings to play around with.

The mid-section of the map is much more controlled, with very specific navigation points to and from mid.

It feels like the map playout overall favours long angles or angles that require great aim to reward success properly. 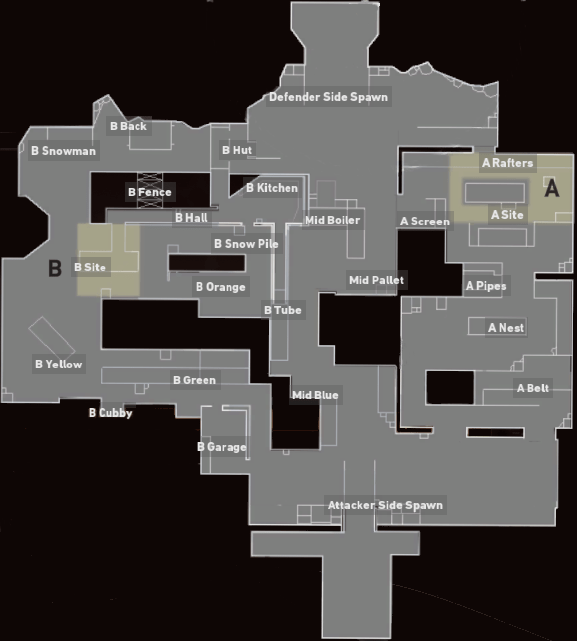 A site’s warehouse is full of screens and verticality to create openings and to lurk.

There are also opportunities to rush the site with a contestable zipline for both teams, making it action-packed if players want to spice up the game.

Using the zip line is going to require cover though from either team as it leaves the user exposed. The defenders that rush need to be careful if the attackers aim to push to A Elbow on their side.

The verticality of A works well with Agents like Jett, especially with the Operator. Other great Agent choices are Cypher, Sova, Raze, etc, who gain key intel or really work with the angles the space offers.

These Agents are the ones that will be able to find key information from people lurking around corridors, hiding in suspended positions, or getting places other Agents can’t.

B site seems to be the much more rigid site of the two on Icebox. The site is close quarters, and the B site angles seem to favour the defence generally.

B Kitchen has multiple angles that the defence can hold which observes two different mid approaches and has clean access to B site itself.

Then there are long angles with great peak potential on the outside, with the site itself contains penetrable boxes, short walls, and containers to peak around or hide inside of.

The key to the B site seems to be about Kitchen control. Taking this position denies most of the leverage that a B defence may have.

For example, Brimstone can safely burn out Spike planters on B with a well-placed Molotov bounce. The Molotov will catch out what players recognize as a safe default planting spot, forcing them to stop planting and wait or force them into the open before getting into the container.

Players that chose to go into the open must contend against any defensive player that drops out from Kitchen, or a player on Snowman.

A way to counter this is to get an attacker to come up B Tube. Any Attacking Agent with a near sight ability will have a better experience than most taking this difficult angle. Once an attack makes it through Tube into Kitchen, they will gain heavy cover over the B site for their planter.

Agents like Brimstone, Omen, Reyna are some of the best options both teams have of making the most out of controlling the site. Their smokes, nearsightedness, and zone fo control, is extremely useful for the site.

Mid is once again a section of the map that allows teams the ability to rotate to different areas of the map.

The difference with Mid on this map is that the contest is not as wide as the other maps. Mid is essentially Z shaped on its actual angles.

The trick for Mid is that many Agents can get over the walls, or Sage can wall off areas of mid to make people rotate solely through the outside of the map.

Taking Mid control is a big deal for attackers to gain B site. Not to mention that rotating to A site through Mid means players can cut off most of the elevations in A site and play through A screens instead.

Icebox is currently a work in progress and is suspect to change ant any point through October 27.