The JAK-12 pays tribute to a classic Modern Warfare weapon

Season 6 of Modern Warfare has seen the return of two iconic weapons from the first two Modern Warfare titles – The SP-R 208 and now the JAK-12 shotgun.

The SP-R was been in the game since the start of Season 6, and with update 1.28, the JAK-12 makes its long-awaited debut on multiplayer and Warzone.

The reincarnation of the AA-12 shotgun from Modern Warfare 2 was and still is, considered a classic weapon that was unbeatable in close-quarters engagements.

With such a wide range of attachments to select, we have selected three loadouts that will give you an unparalleled advantage in both Multiplayer and Warzone.

Here’s our guide to the JAK-12 as well as some handy Modern Warfare tips and tricks to dominate the opposition.

The close-range metagame for multiplayer and Warzone is frequently changing, with players opting for a range of sub-machine guns and other shotguns to deal maximum damage when getting up close and personal with the enemy.

With a drum magazine, grip tape, and laser attached, the JAK-12 is extremely easy to use and thanks to its supreme damage output and mobility stats, it’s very easy to go on a killing spree.

In terms of outright versatility, this is the perfect loadout to excel in close-range encounters. 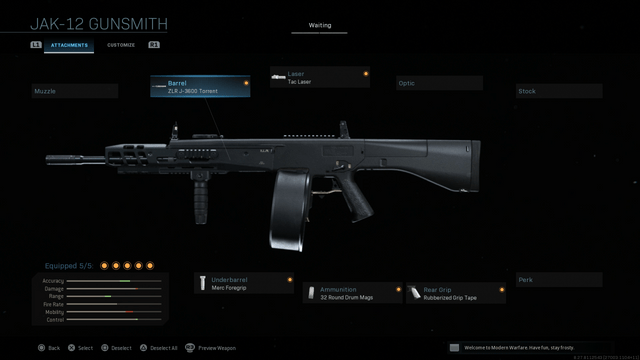 This particular set of attachments extends the damage range, making the JAK-12 much more effective at longer distances. The combination of foregrip, grip tape and laser provide little to no recoil alongside improved accuracy when firing from the hip.

Double Time doubles the length of Tactical Sprint, allowing you to navigate the map much faster. Ghost will keep your location hidden from any enemy UAVs while Tracker enables you to see the footsteps of any nearby opponents, giving you the chance to track their whereabouts for a straightforward elimination.

As always, equipment choice is down to personal preference but we have opted for a Semtex alongside a stun grenade. The Semtex is a great all-rounder, able to be stuck to objects and opponents and the stun grenade stuns the enemy, giving you enough time to kill them before they have a chance to seek cover.

The ability to sneak around the map undetected is perfect for this loadout. Activate Dead Silence to flank behind the opposition to make a play worthy of any highlight reel.

This streak combination requires a minimal number of kills. The counter UAV is perfect for disrupting any opposition relying on their minimap, a well-timed cruise missile is a guaranteed kill the majority of the time, and the wheelson always makes an impact regardless of its location on the map.

Read More: Modern Warfare And Warzone: How To Unlock The JAK-12 Shotgun

This loadout fully utilises the JAK-12’s mobility and also brings the fire. 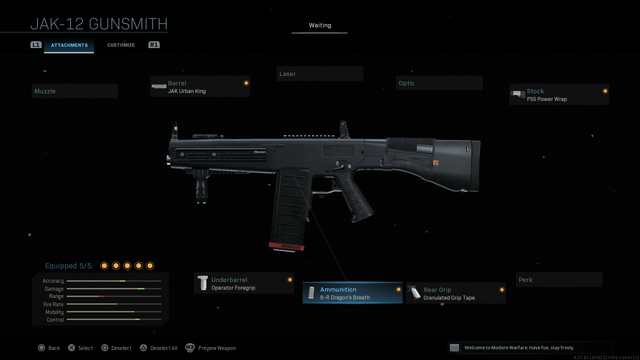 This attachment combination focuses on outright mobility and power as opposed to recoil control. The operator foregrip slightly controls the recoil but thanks to its kick and the dragon’s breath rounds, one-shot headshots are a very regular occurrence.

Quick Fix immediately starts health regeneration, perfect for when you’re in amongst the action. High Alert increases your awareness by pulsing your vision every time an enemy out of your vision has you in their sights and Battle Hardened increases your resistance to any flash, stun, EMP, and gas effects that are likely heading your way during a match.

This may seem like an unorthodox combination of equipment but both can be extremely useful in the heat of battle.

A well-timed Molotov can deal a wealth of damage onto an opponent, making them easy pickings for your shotgun. The smoke grenade is particularly useful too. Use it as a makeshift piece of cover or to cover your tracks as you attempt to escape an oncoming opponent.

Further increase the damage output to insane levels by loading Stopping Power Rounds into the magazine.

Cluster strikes are great for clearing out heavily contested areas of the map. The sentry gun and the VTOL can be extremely deadly, especially when it’s placed locking down a specific area of the map.

This particular loadout pays homage to the AA-12 beast from Modern Warfare 2.

Could the JAK-12 be the next close-range beast?

This attachment combination drastically increases the range alongside a slight buff to damage output. The slug rounds pack a hefty punch, always guaranteeing a kill with just a single shot to the upper body.

EOD provides some much-needed resistance to any enemy lethal equipment. Hardline makes killstreaks one less kill to earn, which is perfect when playing aggressively. Last but not least is spotter, which enables you to see any enemy equipment through walls which can come in handy when pushing round a corner where a claymore could be waiting on the other side.

This is a classic combination of equipment that always results in a few extra kills being added to the scoreboard.

A well-placed trophy system can provide a massive amount of cover from enemy utility. Place it on a Hardpoint hill or Domination flag you are trying to capture to give you and your team the best chance of securing control of the objective.

This combination may seem like a stretch but with Hardline equipped, the higher killstreaks can be obtained very easily with a bit of tactical play thrown in!