Is second time the charm for Oculus' popular Quest headset?

I’ve got to admit, I was a massive sceptic when it came to VR.

Sure, climbing a ladder on Mt Everest was cool. Hell, even some of the recent trailers showing off John Woo-style gunplay piqued my interest. But no matter what marketing material was thrown my way, I remained unconvinced.

Embarking On A Quest

Enter the Quest 2 – Facebook’s latest entry into the Oculus line-up of headsets. It’s certainly handsomely packaged – swaddled comfortably with its two handgrips flanking the main unit. It makes a statement… and it needs to. The Quest 2 is going head to head (no pun intended) with the Xbox Series X / S and PS5 for consumer’s hard-earned cash this Christmas.
Thankfully, it’s hard not to get excited when the Quest 2 boots up – the clever virtual display teleporting you to a sun-kissed villa overlooking the sea (VR tourism, anyone?). And thanks to the Link cable, it’s incredibly easy to set up to your PC to enjoy a host of Steam VR games (more on this later).

For ease, we’ll break the Quest 2 into 3 areas… graphics/performance, comfort and of, course, games. 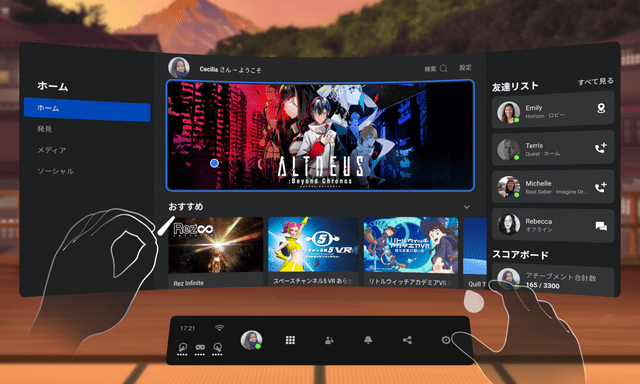 Menus are slick and stylish

The Quest 2 features a brand new LCD display that beams 1832 x 1920 pixels-per-eye – up 50 per cent on original Oculus Quest. Under the hood is a custom Snapdragon XR2, developed specifically with VR in mind. There’s even support for 90Hz (compared with the original Quest’s 72Hz), to help combat motion sickness and responsiveness.

All of this delivers a silky smooth VR experience with no noticeable slowdown. The real fun, though, comes with the Oculus Link cable, which is unfortunately sold separately at £62. Here, you can connect the Quest 2 to your PC and play arguably one of the best games of the past few years – Half-Life: Alyx. In fact, the game is so good it’s totally worth getting a VR just to try it. Plus, it looks stunning – truly next-gen.

Battery life is a decent 2/3 hours… and by that time you’ll need a break (more on this later).

Away from the games and the menus are super easy to navigate. Everything from setting up a guardian (play area) to configuring graphics and even customising your VR home is explained well and not complicated. It really is plug and play.

As for the controllers, they’re incredibly easy to use and feel sturdy. Again, for someone new to this VR world, I picked everything up easily. They’re battery powered so be prepared to replace them a few times if you’re a regular player.

The Quest 2 comes with an adjustable head strap and a, rather fiddling, head-width adjuster – which can take a bit of time to get right. Inside the unit, the screens can be moved depending on an individual’s eye position. Be warned, though – get this even slightly wrong and the image will appear blurred and you’ll be left with indents either side of your nose.

While the unit is front heavy, a lot of thought has been put into counterbalancing the weight. Still, after an hour or so, you’ll need a break. 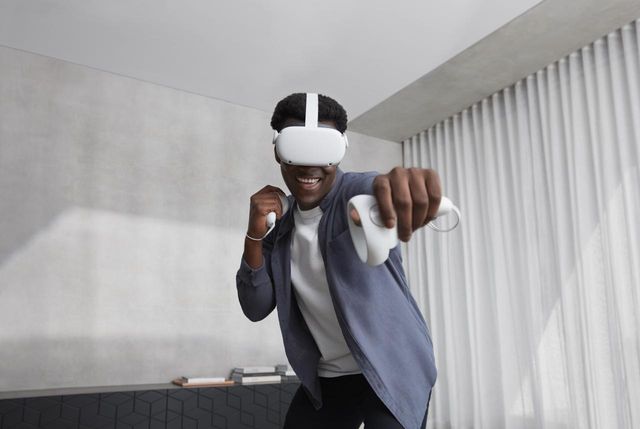 Even on the second iteration, the lack of wires feels incredible

There are a ton of games that are available right from the off - such as Beat Saber, Superhot and a John Wick/John Woo inspired shooter called Pistol Whip (which I’m absolutely going to download after spotting it on the store last night).

Oh, and for Star Wars fans, there’s Vader: Immortal: A Star Wars VR Series which is definitely worth a look.

However, providing you’ve got a powerful PC, it’s absolutely worth linking to Steam VR and trying out the likes of Alyx and other, more graphically intense games. Upcoming games look strong, too – including a Splinter Cell game, Medal of Honor: Above and Beyond and Jurassic World: Aftermath.

So, some closing thoughts. Quest 2 has truly converted me. I’m now excited about VR and how it can sit alongside traditional gaming as a completely new experience. At £299, it’s cheaper than the Series X and PS5 but offers true next-gen VR performance.

VR will never replace TVs and monitors, but the experiences it offers are so mind-blowing – thanks largely to new tech – that the Quest 2 should be on every gamer’s Christmas list.