Fortnite Chapter 2 Season 4: Midas Coming Back To Take His Throne?

Midas’ Throne has returned to its rightful place on the Fortnite island.

Chapter 2 Season 4 might be gearing up for a battle with Galactus and a Fortnitemares event, but their own story continues as well.

Midas’ golden chair is back in The Authority, and with the Last Laugh bundle only weeks away, we’re ready for an epic return by the super-spy.

As we’ve previously covered back in August, Midas' storyhas been fairly important these last couple of seasons. 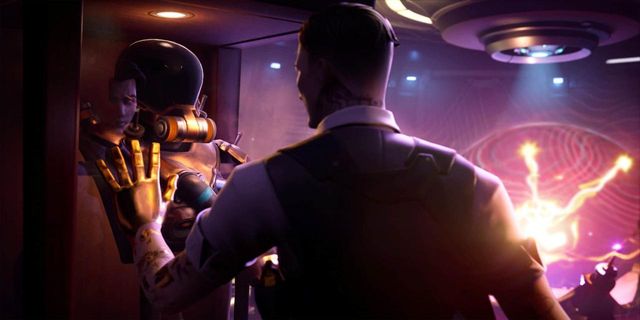 Since Chapter 2 Season 2 where we first met him, Midas has been on a downward trajectory.

The ex-Head of Ghost had an excellent plan to fight back the storm, but promptly flooded the map.

Following this, he was seemingly devoured by a shark in the Chapter 2 Season 3 Trailer.

Though following this, there have been some map updates suggesting he somehow survived and is making a comeback.

The Last Laugh bundle shows off Midas wearing some pretty epic armour, perhaps this suit is responsible for keeping him alive.

GHOST has steadily built up a presence with the Fortilla, and following SHADOW’s removal from The Authority, perhaps they will take their old base back?

What form The Agency/Authority will take on is as of yet unknown, though a sparkling gold palace could be a sight to behold!

When will Midas Return?

Given the Last Laugh bundle’s release date, we could see Midas come back at the end of Season 4, just-in-time for Chapter 2 Season 5!

With the reality breaking rifts and Marvel events going on, perhaps we’ll also get to see more of the strange office we saw in Season 2’s event.

Exactly how it will all wrap up we cannot know for sure just yet, but the hype is definitely building and we believe Epic Games will deliver.