Treyarch is hard at work ahead of weekend two

The opening weekend of the Black Ops Cold War beta is done and dusted.

The beta for the highly anticipated return to Black Ops was the opportunity for players to get their hands on an updated version of the game, after PlayStation players were given access to a limited-time alpha earlier in the year.

Between the alpha and the beta, a wide range of improvements and modifications were made by Treyarch in order to make sure Black Ops Cold War is a good as it can possibly be.

With just days before the second weekend of the beta goes live across PlayStation, Xbox, and PC platforms, Treyarch is said to be hard at work making sure everything is up to standard before the servers go live on October 15th.

One of the main concerns during weekend one was server performance.

The majority of feedback during the first beta weekend was overwhelmingly positive, but many players encountered poor server performance during a match.

In order to ensure a smooth online experience for all platforms, multiple sources are reporting that Treyarch is working hard to improve server performance in time for the second and final beta weekend before the game releases on November 13th. 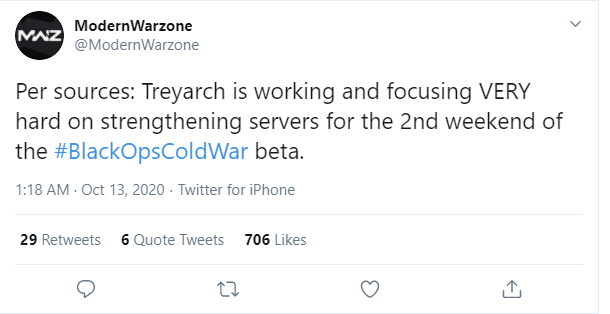 Server performance in an online game is crucial to enable players the smoothest playing experience possible.

Given the scale and widespread impact of the problem, it is extremely impressive to see the developers leap into action to resolve this issue.

Considering there are just a handful of days between the end of weekend one and the beginning of weekend two, Treyarch certainly has its work cut out as it attempts to rectify one of the standout problems from the beta so far.

Alongside Treyarch racing to get the servers fixed in time for weekend two, a patch has gone live for PlayStation users.

Details surrounding its content are vague, but it appears that it has been added in order to fix a number of errors and stability issues that were encountered during weekend one.

Weekend two of the beta is open to all platforms. Xbox and PC players that placed a digital pre-order will have the ability to pre-load the beta on October 13th.

This allows you to download the game in preparation for when the servers go live, allowing you to jump straight into the action with no need to wait for the download to complete.

Before the beta begins again, check out our article on slide cancelling, a mechanic that will give you the upper hand over your opponents.