Looking to beat the AI on Ultimate difficulty in Squad Battles? Here's how!

With the first full week of Squad Battles complete in FIFA 21 Ultimate Team, thousands of FUT players have been searching for the best ways to beat Ultimate Difficulty against the AI and maximise their points per game in their quest for the best Squad Battles Rewards.

The number one tip we can give for beating the AI on Ultimate difficulty on Squad Battles is to play with a friend on Co-op.

PSN user WARDIE_OWNZ and Owen__Hope shared their tips from this past week, which saw them take home 1st and 6th in the world during Squad Battles Co-Op.

Off The Ball Runs

A key to their success against Ultimate difficulty Squad Battles in Co-Op was off the ball runs. Making sure that the player controlling a runner makes runs in behind with pacey players for the ball carrier to find was a major factor in consistently winning games on the hardest difficulty.

Given that the attacking AI on Ultimate difficulty is very capable at moving the ball, a big tip was to be as patient as possible when defending, making sure not to draw defenders out of position when pressing to leave gaps for runners.

The pair explained that the wings were key in breaking down Ultimate AI in Squad Battles, again utilising the off-the-ball runs to break in behind defences.

Running fake shots have always been a sure-fire way to break down the AI, and Ultimate difficulty is no different. Making sure to perform running fake shots is a great way to burst free of defenders on the break to create more goal-scoring opportunities.

How To Maximise Squad Battles Points

Just playing on the highest difficulty isn’t necessarily the best way to ensure that you achieve the most available points from every Squad Battles game. 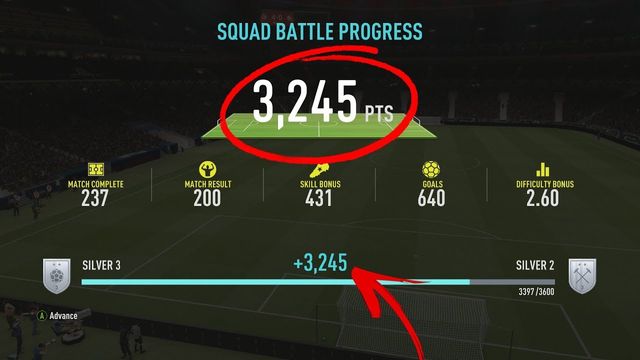 When breaking down your Squad Battles point per game, this is split into 5 categories.

This will remain fairly consistent and will be the points awarded for simply completing the match on the given difficulty.

Very simply, this will be a fixed value for winning, drawing or losing the game in Squad Battles.

Skill Bonus consists of a number of factors. If you can hit the maximum of each of these, you’ll be earning as many points as possible.

You also get a goal bonus per game, maxing out at 5 goals. Ensuring that you score 5 goals against the CPU will guarantee you the most points possible.

This is the overall multiplier for the cumulative points across the other 4 categories, and will vary once again depending on difficulty.