FIFA 21 TOTW 3 LIVE: Release Date, Team of the Week 3 Squad, How To Get In-Forms And Everything You Need To Know

TOTW 3 goes live this Wednesday, check out who's expected to get in!

Team of the Week is back for a third week in FIFA 21 Ultimate Team and releases today, 14th October.

Starting on October 14th, some of the best performers from the past week of football will receive special upgraded In-Form cards!

This week will feature a number of players from the last week of International matches.

TOTW 2 was great, so how will week 3 fair up? It's looking like an exciting week with the big headliners looking like Neymar, Son, Courtois and Lewandowski.

FIFA 21's first TOTW will be revealed on the 14th October at 6pm BST.

They will then be removed from packs at 5.59pm BST the following week (21st October).

Team Of The Week 3 Squad 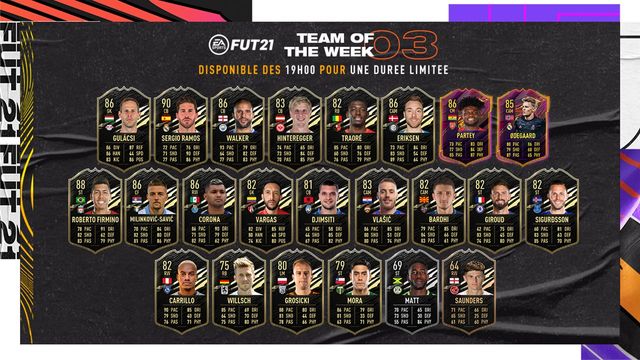 TOTW 3 has been a tricky one to predict for the most part, with a limited selection of international fixtures to choose from 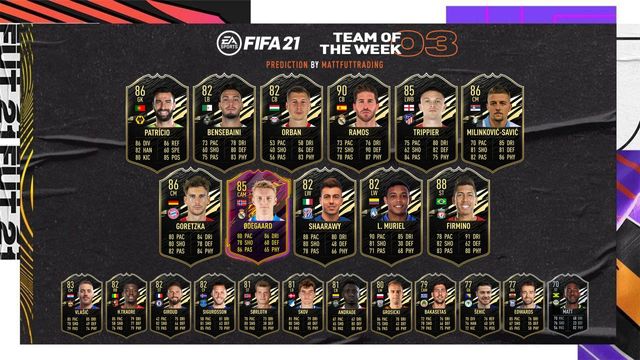 Rui Patricio kept 2 clean sheets against Spain and France, with several saves in the process, meaning he could be the TOTW 03 GK selection.

Bensebaini scored the only goal in a 1-0 win to Nigeria, which should be enough for a spot in the TOTW 03 squad.

The Hungarian scored a goal in Hungary’s 3-1 win over Bulgaria in their European qualification match at the weekend.

Despite not grabbing a goal contribution, Sergio Ramos earned a MOTM in Spain’s 1-0 win over Switzerland in their UEFA Nations League group match.

Trippier was in fine form over the weekend, earning a couple of assists across the 2 matches against Wales and Belgium, playing a LWB role in the 2nd fixture.

The big Serb scored 2 goals in their European Championship Qualification against Norway, as well as a MOTM award.

A goal and MOTM for Leon Goretzka against Ukraine in the Nations League could be enough to secure an IF this week.

The newly released OTW should be getting an upgrade this week, after earning 2 assists in Norway’s 4-0 win against Romania. Worth noting that Haaland won’t be eligible for another TOTW despite a hat-trick, as he was in TOTW 2.

2 goals for the winger in Italy’s 6-0 friendly win over Moldova could easily earn him a spot in the TOTW with rather few attacking options available.

Another winger option, Muriel earned 2 goals and MOTM in Colombia’s 3-0 win in their World Cup Qualification match against Venezuela.

The Brazilian maestro earned 2 goals in Brazil’s 5-0 thrashing of Bolivia, which should make him the standout attacker in this TOTW.

With this being the official launch week of FIFA, these in-form cards will likely go for much cheaper before rapidly rising. If you can afford to invest in one and sell it on a few weeks later, once coins are flowing in the market, you should be able to make a tidy profit.