Looking for a deadly secondary weapon? Then look no further!

For Black Ops Cold War, shotguns have moved into the secondary weapon category, alongside pistols, melee weapons and launchers.

The Hauer 77 may seem familiar to some Call of Duty veterans. The shotgun resembles the W1200 from the very first Modern Warfare game, and like its predecessor, it is dominant in close-quarters engagements.

Despite its immense power against the vast majority of the weapon arsenal at close-range, the Hauer 77 is let down by its slow and sluggish mobility, slow reload speed, and accuracy when you attempt to take down an enemy from distance.

Its ability to eliminate an opponent in a single shot is the party piece for the Hauer 77. Although it has its flaws, the weapon is extremely easy to use and is one of the stronger secondary weapons to have in your back pocket.

This set of attachments makes the Hauer 77 the perfect addition to any loadout. The combination of muzzle and barrel increase the rate of fire and the spread, increasing the likelihood of you hitting your target.

The laser drastically increases hip-fire accuracy, perfect for those situations where running and gunning is the play. The choice of the shotgun stock may seem surprising, but with 15% increase in sprint out speed, it allows you to react to an oncoming opponent in the blink of an eye. 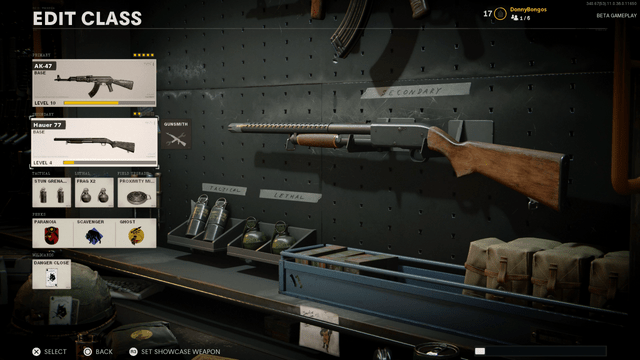 Is the Hauer 77 the best secondary weapon in Black Ops Cold War?

The AK-47 is one of the strongest assault rifles in the entire game. With these five attachments equipped, it is unbeatable at mid-range engagements and complements the close-range lethality of the Hauer 77 perfectly.

Like the trusty frag grenade, C4 can be just as versatile when used correctly in specific scenarios. Looking to clear out a contested objective? Head towards the flag or the hill, throw the C4 into the action and watch the score roll in!

Smoke grenades are the perfect piece of tactical equipment to use with this particular loadout. If you find yourself in a spot of trouble, throw the smoke where the pressure is coming from and sprint out of there before the opposition finds you.

Alternatively, use it to distract the enemy by popping a smoke on an objective, allowing you to move around the area without being spotted.

There’s no chance you will be able to take down a Spy Plane with a shotgun in your hands. Select the SAM Turret as your Field Upgrade, place it in the open, and let it do all the hard work for you!

By keeping the skies clear, it will allow you to continue your shotgun spree and focus on the action in front of you, rather than having to duck and dive out the way of an incoming chopper.

This combination of perks is ideal when rushing around the map with the Hauer 77. Tactical Mask increases your resistance to flash and stun grenades alongside immunity to gas while Tracker enables you to see imprints of enemy footsteps on the ground, giving you the ability to sneak up behind them and take them out with a swift one-shot kill.

Last and by no means least is Ghost. This perk will keep you hidden from any enemy Spy Planes when moving around the map, which is perfect for this style of play.

Perhaps the most underrated Wildcard in the game, Danger Close allows you to spawn in with two pieces of lethal and tactical equipment, bolstering your loadout with an extra piece of C4 and an additional smoke grenade.