Struggling to master the AK-47 on Black Ops Cold War? Check out our weapon guide!

The beta for the highly-anticipated release of the next instalment in the Call of Duty franchise has begun and builds on the huge success of the alpha which took place earlier in the year.

The AK-47 assault rifle has been a staple of several Call of Duty titles and it appears in Black Ops Cold War packed with high damage output and high levels of recoil.

The rifle was developed in the late 1940s by Mikhail Kalashnikov and was used by the Soviet Union until 1974. It is still used by many military forces today.

After some time experimenting with the attachments on offer, what is the ultimate AK-47 loadout?

Like the majority of assault rifles on Black Ops Cold War, the AK-47 excels in mid to long-range engagements.

What sets it apart from its counterparts is its excellent damage output, enabling players to deal plenty of damage even when they’re hiding behind cover.

When engaging with an enemy at extremely long distances, it does fall short due to its relatively high levels of recoil but with the right attachments equipped, this can be bought down to more manageable levels.

This combination of attachments can only be obtained once you hit level reaches 53, meaning they are tough to access.

The muzzle and foregrip bring down the vertical and horizontal recoil so drastically it turns into a laser beam!

Combined with the Gru Elastic Wrap, you can reduce the ADS time by 30%. Flinch resistance by 60% and aim while going prone. 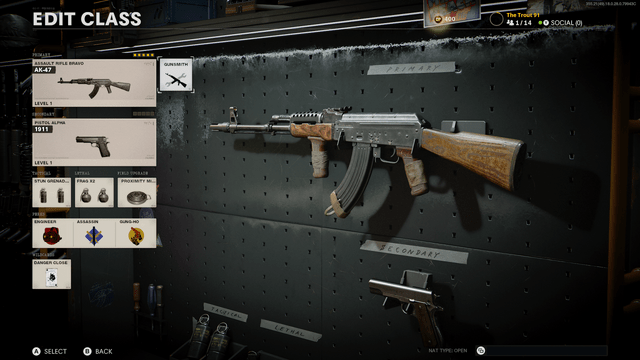 With a limited selection of scorestreaks, many players have opted to select the Spy Plane in order to provide the locations of the opposition who aren’t running Ghost as a perk.

Use the Cigma 2 to lock onto any Spy Planes or Attack Helicopters that enter the airspace during a match to maintain an outdoor presence on the map.

If you are after a secondary that deals more damage to your opponents, select the 1911 pistol. Even with no attachments, its semi-automatic rate of fire can be the perfect crutch to fall back on when the going gets tough.

Perhaps the most versatile piece of lethal equipment in the game, the frag grenade can be used in a multitude of ways that often result in an explosive ending for an enemy and another kill for you.

Some of the maps on Black Ops Cold War are filled with plenty of corners to hide in and ambush an opponent. Be sure to throw your stun grenade around the corner or into an area where an enemy could be hiding to scout what’s ahead of you.

Once unlocked, the trophy system is a crucial component of your loadout, especially when making a play on a hotly contested area of the map.

Place the trophy onto a Domination flag or a Hardpoint hill to deflect any incoming equipment being thrown by the opposition.

Thanks to its outright power, additional attachments aren’t necessary in order to achieve success with the AK-47.

Engineer allows you to spot any enemy equipment and Field Upgrades through walls, ideal for looking out for any enemy Field Mics and Proximity mines.

Scavenger is the perfect second perk as it enables you to replenish your ammo supply from fallen soldiers, allowing you to keep laying down the fire.

Lastly, Ghost keeps you hidden from any enemy Spy Planes whenever you are moving, ideal for traversing the map undetected.

With no need for any extra attachments or perks, we selected Danger Close as our Wildcard.

This particular Wildcard gives you the ability to spawn in with two pieces of lethal and tactical equipment, further adding to the firepower that this loadout possesses.