Rainbow Six's Worst Operator, Tachanka, Is Getting A Rework

Our Russian Boy is getting a boost.

Big Tachanka, Siege's worst Operator, is finally getting a rework with a patch that hits the game's test server tomorrow.

The character is getting some big changes to his mobility, as well as his available weaponry, and is even getting a new gadget.

You can check out Tachanka's Rework explainer below:

In a game all about rotating and probing enemy defences, Tachanka has always been a tough sell.

That's mainly based around his gadget which is an LMG that can be mounted, rooting him in place.

The big change is that his DP27 LMG is no longer required to be mounted and can instead be used as his primary weapon.

This makes him able to tear down walls with ease, and while the weapon will still draw plenty of attention, at least you can get moving when things get tough.

The shots can even be bounced off of walls, and fires five grenades at once - an ideal way to hold territory.

Good news, though - if you get a shot wrong and end up setting Tachanka alight, he's got the Withstand ability now.

That means he can get himself up without needing a revive.

Check out his full loadout below: 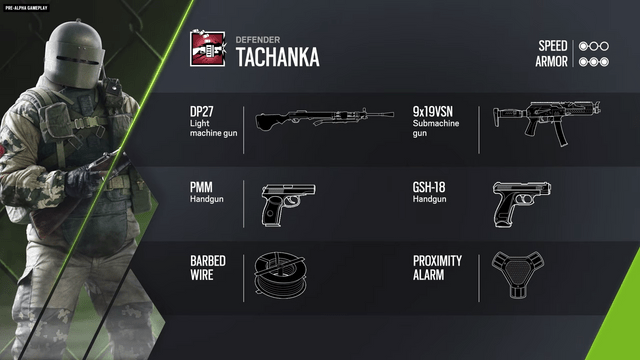 Tachanka's DP27 can be swapped for an SMG if you'd prefer.

As you can see, he's still slow, but Ubisoft has promised increased mobility which is great - at times it feels like walking through treacle.

For more on Rainbow Six Siege, be sure to check out our full patch notes for the game here.