FIFA 21 TOTW 2 LIVE: Release Date, Team of the Week 2 Squad, How To Get In-Forms And Everything You Need To Know

TOTW 2 is arriving this Wednesday, check out who we think will make the cut!

Team of the Week is back for a second week in FIFA 21 Ultimate Team and releases TODAY!

Starting on October 7th, some of the best performers from the weekend of football will receive special upgraded In-Form cards!

TOTW 1 was STACKED, so how will week 2 fair up? It's looking like an exciting week with the big headliners looking like Neymar, Son, Courtois and Lewandowski.

FIFA 21's first TOTW will be revealed on the 7th October at 6pm BST.

They will then be removed from packs at 5.59pm BST the following week (14th October).

Team of the Week 2 Squad

TOTW 2 looks set to be full of awesome attacking talent, with Neymar, Lewandowski and Haland all in the mix! 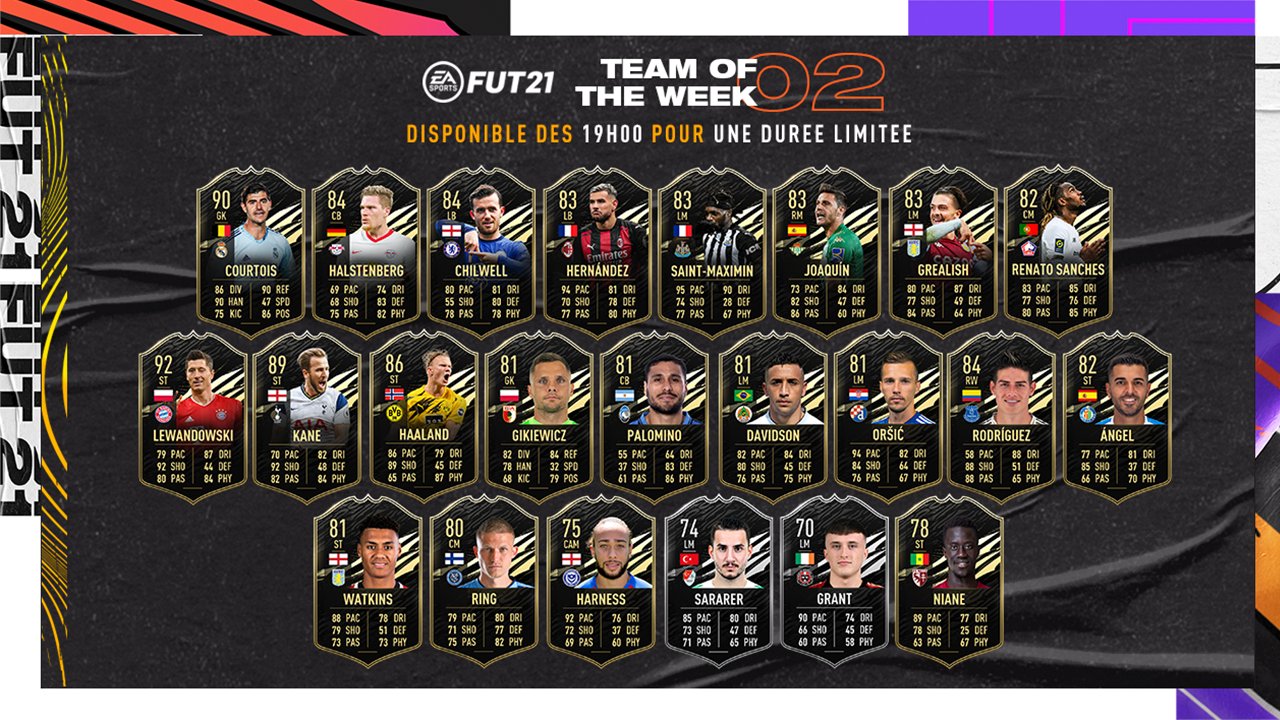 Team Of The Week 2 Predictions 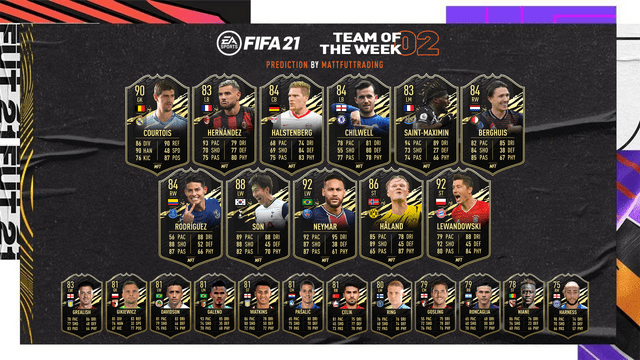 Courtois made 4 saves and put in a MOTM performance in Real Madrid’s 2-0 away win at Levante, and with few keepers in contention, could sneak into the TOTW!

A MOTM performance for the pacey French LB in which he scored a goal and kept a clean sheet in a 3-0 win over Spezia should stand him in good stead for an IF item.

A tasty position change here, with Halstenberg playing LCB in a 343 system for Leipzig in their 4-0 demolition of Schalke, in which the German picked up 1 goal, 1 assist, a clean sheet and MOTM for his efforts.

A dream Premier League debut for Ben Chilwell, who picked up 1 goal, 1 assist and a clean sheet for the Blues in their biggest Premier League win of the season so far.

Despite Callum Wilson picking up more goal contributions, Saint-Maximin picked up the MOTM award for a strong 1 goal and 1 assist performance against Burnley at the weekend.

After narrowly missing out on a TOTW 1 card, Berghuis is straight back in contention after a 2 goal and MOTM performance in Feyenoord’s big 4-1 away win at Willem II.

The Premier League leaders Everton, yes you read that correctly, have been nothing short of brilliant so far this season, and with James picking up 2 goals and 1 assist in their 4-2 home win to Brighton, they’re set for their first IF of the season!

In a weekend of huge scorelines in the Premier League, Spurs’ 6-1 thrashing away at Old Trafford can’t be ignored, with Son picking up 2 goals and 1 assist.

As if this week can’t get much better, Neymar looks set for an IF after 2 goals and an assist in PSG’s 6-1 win at home to Angers. The first of many we hope!

Despite the American, Giovani Reyna picking up the MOTM for his 3 assists against Freiburg, Haland’s 2 goals and 1 assist can’t be ignored. He’d certainly help make TOTW even more stacked!

Lewangoalski is without a doubt the best striker in the world at the minute. 4 goals, including a thrilling 93rd minute, winning penalty in Bayern’s 4-3 home win to Hertha guarantee him a TOTW 2 IF.

With this being the official launch week of FIFA, these in-form cards will likely go for much cheaper before rapidly rising. If you can afford to invest in one and sell it on a few weeks later, once coins are flowing in the market, you should be able to make a tidy profit.