Is this the dream?

Gameweek 4 has reached a miserable climax for a number of players, myself included.

With players averaging just 48 points this week, we're here to analyse what went wrong and where it could have gone right.

Here's the dream team for the fourth gameweek: 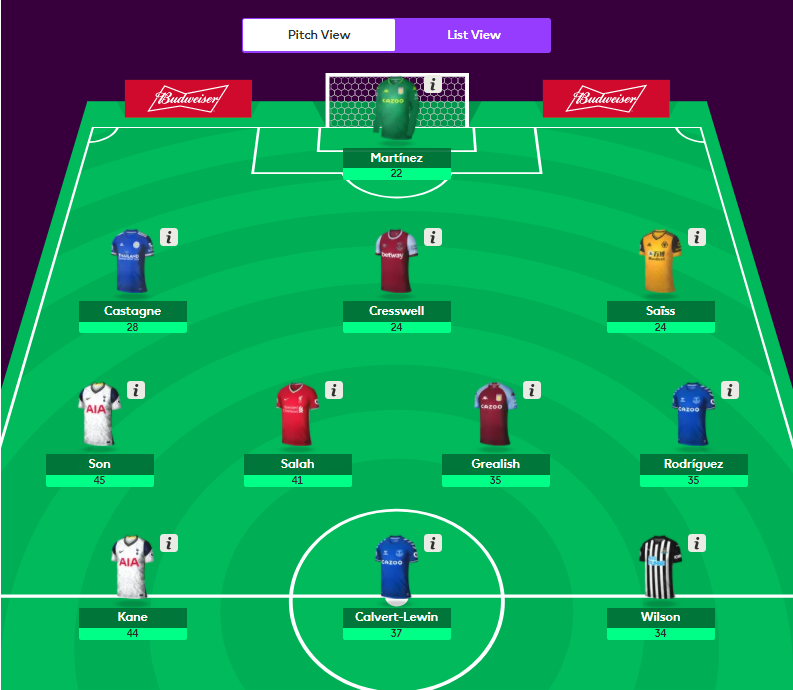 Aston Villa thrashed current champions, Liverpool, in what was no doubt the most shocking result. Spurs also dominated Manchester United, in what is typically a cagey affair. Leicester was also suitably humbled by West Ham after their great start to the season and City drew with Leeds.

With my squad, I earned a poor 34 points, all of my big signings faltered other than Salah. 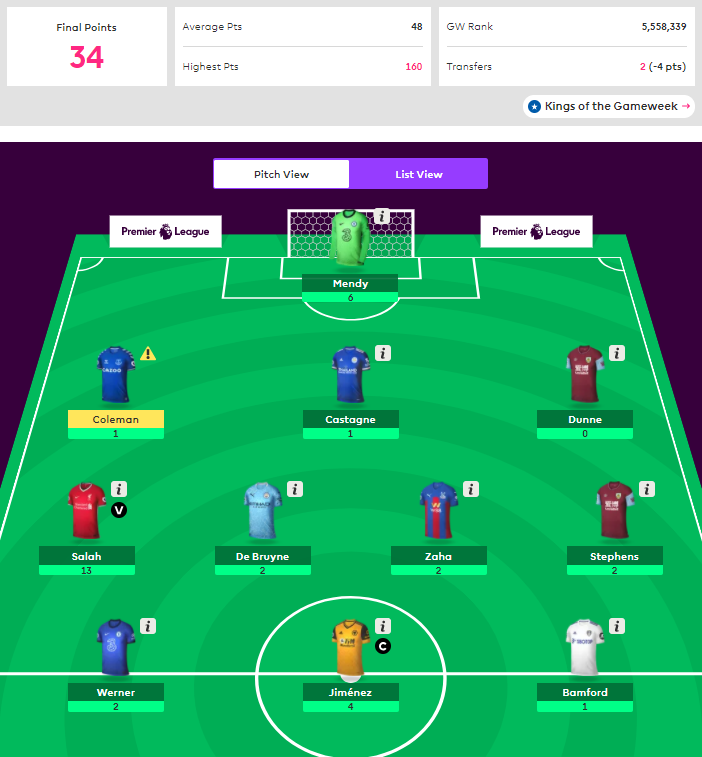 By activating my Wildcard last week, it gave me a real chance to put my team in order for the future. I think overall, I did that and this was just one of those weeks where my choices weren't always going to work out.

The natural transfer came in with Caballero (4.9 million) being taken out for Mendy (5.0 million). I think Mendy is a real bargain considering he plays for a top team in the league. I think Chelsea have a long way to go before they sort their defence out, but having someone like Mendy in to secure a few clean sheets through the season with a good defence in front of him is a no brainer for me; it certainly worked out this week.

Lastly, my second transfer involved taking out Kane for Jimenez. It was really touch-and-go whether I take out Werner or Kane, but I felt Werner's goal in midweek may spur him on to kick on.

I think that was ultimately wishful thinking for a naive Chelsea fan as he was stuck on the left-wing for large parts of the game; a waste of talent if you ask me.

I really didn't expect Spurs to run riot on Man U as they did, even though the Red Devils have been in ropey form they always turn up for this clash. Not to mention I expected an injured Son to be out, hurting their attacking options.

Looking at the fixtures, I felt Jimenez was likely to get more out of his fixture than Kane. But, Football is a funny game and it certainly made a joke of me this weekend.

Lastly, with Mount being rested it meant my substitute Stephens joined in on the fun.

On paper, we were almost spoilt for choice with striking options but very few actually worked out.

Danny Ings, Riyad Mahrez and Raul Jimenez had a poor day out and it was a big miss for so many teams.

Sadio Mane was also injured and didn't take part in their battering against Villa, solidifying how important he is to that lineup.

Neal Maupay provided a spark for Brighton once again, despite their demise against Everton.

Let's take a look at who we advised you to avoid:

Bruno provided the only goal for Manchester United, once again from the penalty spot. But he looked very lost throughout the game. What I have learn in the past few weeks is not to bet against penalty takers as they are coming far too frequently.

Lamperty continues to impress, but the young defender couldn't help his side stop a scary Everton side.

Conor Coady didn't face too many threats from Fulham and thus managed to easily hold onto a solid 6 points and their second clean sheet of the season.

Heung-Min Son I was very worried for as his injury seemed severe, but it may have just been mind games from Mourinho and the Spurs camp. Son came on fired up and I know a handful of players who transferred him out due to his supposed injury...

Dominic Calvert-Lewin continues to impress and I think its take four weeks but I am finally converted. He's a great talent and well-rounded striker; he'll still fail to score when I put him in the side though which is what is frustrating.