The now-deleted tweet was intended to poke light at the way certain content creators outline their videos.

But, some people did not take this tweet lightly and now YouTube is facing heavy amounts of backlash.

The tweet itself, which has now been deleted was mocking creators what spend the first 15 minutes of their video talking, before actually jumping into the video.

At first, this appeared to be a wholehearted joke from the YouTube team, as most of us are aware that creators make the most money when their videos go over 10 minutes.

But, when you are making a joke about the practices of your employees; some people are going to take offense to it. 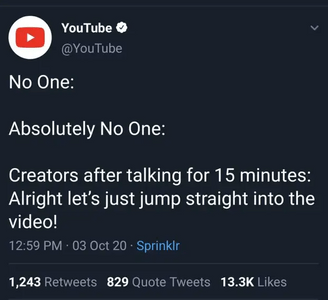 The tweet was only up for two hours, as there was backlash from people all over the world but none more notable than Matthew Ball.

The Head of Strategy at Amazon Studios posted a length Twitter thread expressing his outrage with the tweet. 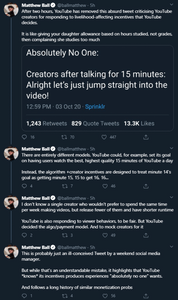 It is hard to pinpoint whether YouTube was in the right or wrong when making this tweet.

While Courage noted the following:

"The sensitivity in today's world is frightening. Nobody can take a joke without being offended or getting offended for someone else."

YouTube's tweet has definitely sparked a rapid discussion about whether this was called for or not.

Be sure to let us know in the comments below what you think about it!

Fortnite Quest: Where Is The Predator’s Apartment In Hunter’s Haven?