Apex Legends is now into its sixth season of content, but fans have been desperate for news on the game's Switch port, first announced at EA Play earlier this Summer.

Now, a Respawn developer has responded to a fan's concern regarding the release of the Switch version.

Grenier replied that they are "still working on it", but cannot say more. 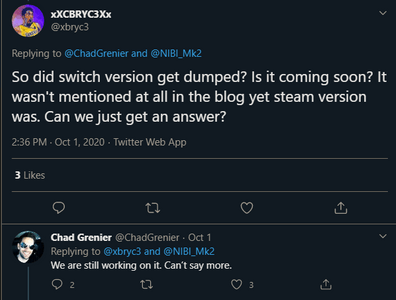 Here's hoping for some news soon, but with the current COVID-19 pandemic, it'd be fair to say that the release timeline could potentially stretch into 2021.

Still, there's always the possibility that Nintendo, a company often known for its secrecy, could be holding the announcement for a Nintendo Direct presentation.

When the game does eventually land on Switch, there's good news for existing fans - it'll support Cross-Play, meaning you'll be able to play with friends on multiple platforms.

The update is coming as part of the Aftermarket event which kicks off on Tuesday, October 6,

Recent leaks even suggested that Cross Progression could also be coming to the popular shooter, although Respawn hasn't commented yet.

Then there are rumours that Season 7's new Legend could be a familiar face from the Titanfall franchise.