The Legend of Zelda Ocarina Of Time To Release On The Switch? Rumors, Leaks and More News!

Regarded as one of the greatest titles of all time, Ocarina of Time is a critically acclaimed game all over the world.

Although it was already remastered for the 3DS, fans have been wanting it to release on the Switch.

The title that originally released in 1998 now has more rumors circulating its migration over to Nintendo's newest console.

Twitter user KeliosFR posted a screenshot of the trademark registration for Ocarina of Time.

Although this got the attention of many fans, many assumed this was just a renewal of an old trademark.

Don't Miss Out: Hori Split Pad Pro for Nintendo Switch only £44.99 on Amazon

However, it appears this is a brand new trademark Nintendo has filed for Ocarina of Time!

This is particularly odd, as we have seen the success Nintendo has had as of late with remasters. As the Super Mario 3D All-Stars Collection was one of the best Nintendo projects in recent memory.

A collection of Mario's greatest hits which was received well by fans, check out our review here. 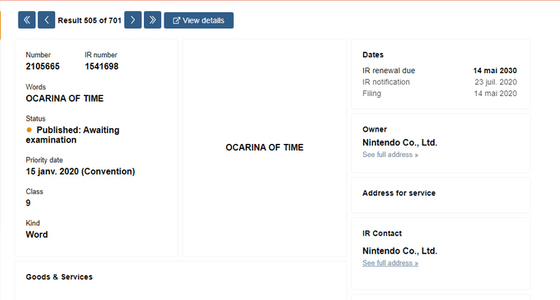 Now, with this trademark being filed; fans have wondered if some sort of Zelda collection is in the works.

Many have pointed to these titles as some of Zelda's best titles that haven't released on the Switch:

Now, we will have to wait and see what Nintendo does in the coming months/years.

We can assume this release will not come anytime soon, as there doesn't seem to be enough time between announcement and release for Q4 2020.