Minecraft fans have already had quite a week. Who could have predicted Minecraft Steve joining Super Smash Brothers Ultimate? But the excitement won't end there as later today (October 3) its time for Minecraft Live.

What is Minecraft Live? Well, it's the defacto stand in for MINECON Live or the Minecraft Festival that was planned for 2020. It's had a lot of names to be quite honest.

All you need to know is that if you love Minecraft, you want to tune in because it's here where we'll learn about all the cool things that Mojang Studios has in the works for the coming months for the Minecraft Universe.

This could be new content for Minecraft Dungeons, Minecraft Earth, and perhaps (most likely) news on the next major Minecraft Update.

After all, it's been a good few months since the incredibly successful Minecraft Nether Update dropped, so it would be good to know what's coming next.

What Time Is Minecraft Live Today?

If you REALLY love Minecraft and want to spend as much time as possible, you can tune into the Minecraft Live Pre-Show, which starts at 11:30 AM ET (we'll explain world start times further down). The main show will get underway at 12:00 PM ET.

If you're scratching your head thinking 'ok, great, but when does the show start for me in my timezone?'. We hear you. That's why there's a handy list of start times just below.

Read More - What Will Kirby Look Like When He Eats Minecraft's Steve? 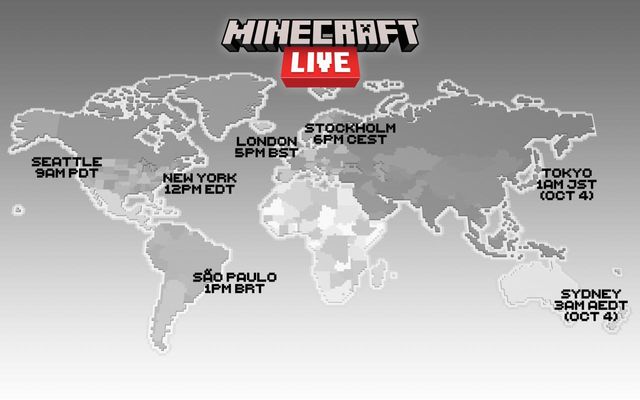 How To Watch And Stream Minecraft Live?

If you own anything with an internet connection, you're pretty much good to go.

So grab your Phones, tablets, PCs or games consoles! They're all good.

You can also watch it on the main Minecraft website. Or this website if you want to be super lazy and keep this tab open to watch with the video (just below).

You can also watch the event on the following social channels if that's your preferred choice of viewing platform:

What to do now?

Well, you could just fiddle your thumbs watching the clock tick down until the start of the event.

OR you could try to decide which new mob you want to added to Minecraft, since another community vote will be running during the show.

"Do you want the oceans to light up with a new Glow Squid? Brighten up the Overworld with the adorable Moobloom? Or chill out with the cool Iceologer?"

Here are a few more details (below), but maybe you should check out their individual videos too if you're struggling to decide.

This cold-hearted illager from Minecraft Dungeons thrives in snowy, icy, and rocky areas. If you vote for this hostile mob, they will move into the new mountain tops that tower over the Overworld. Do you really want that? These mountains are so tall that vegetation doesn’t grow on them – just spiky ice formations, rocks, and snow as far as the eye can see. The Iceologer would make these mountains even more challenging, since they don’t just want to hang out up there. Oh no, when you meet one of them they will hurl flying ice clouds at you. Vote for the Iceologer if you want to experience hardcore snowball fights with a stunning view!

This four-legged flower is a fan favorite from Minecraft Earth, and pretty much the opposite of hostile. Rumor has it that if Mooblooms move into Minecraft, they will be able to interact with bees but nobody has told me exactly how. It’s almost like they want it to be a surprise and they don’t trust me. That is just rude as I am a consummate professional. Do you know how much restraint it took for me to write move instead of moo-ve just now? Anyway, vote for the Moobloom if you want the Flower Forest biome to be more floral than ever!

This shimmering sea creature also made its debut in Minecraft Earth, giving me the perfect opportunity to make a surf & turf joke but I won’t since I have already committed to writing a very serious article™. Let’s look at some factual facts instead of spending more time on puns, no matter how cleverly penned. The glow in Glow Squid doesn’t come from a bomb skin care routine but actually refers to the way it literally glows, in the same way that the Enderman’s eyes do. While we’re comparing this candidate to existing mobs, I can tell you that they are pretty similar to the squid that are already swimming around in Minecraft. They won’t attack players or other entities, but their glow is pretty atmospheric. That’s probably why they prefer dark bodies of water – the effect just isn’t the same in an already sun-drenched ocean. If you want to add more marine life to Minecraft and hasten the alleged squid uprising, vote for the Glow Squid!