With Minecraft's Steve being announced as the latest character for Smash Ultimate, it's got the community wondering who could be next.

It's a cycle that seems to start with every new character reveal and speculation starts to run wild as we see just how far Nintendo can go withe their all-inclusive fighter.

We've seen a character from all genres, studios and publishers...so who else could they ask?

What about Master Chief? While he's not been added yet, there's still hope yet as Microsoft has put out an indirect request to be included.

Given that Mojang's Minecraft is now owned by Microsoft, it's no surprise to see them sharing the announcement that Steve will be featured in Nintendo's brawler.

It certainly opens the door for more collaborations in the future and perhaps Microsoft has indirectly invited Nintendo to take up their offer for the big man in green.

Fans have rallied for Master Chief to be added to the expansive roster in Smash for years to no avail.

The French Xbox Twitter account took things to a new gear in the campaign to get him into Smash in a brief exchange. 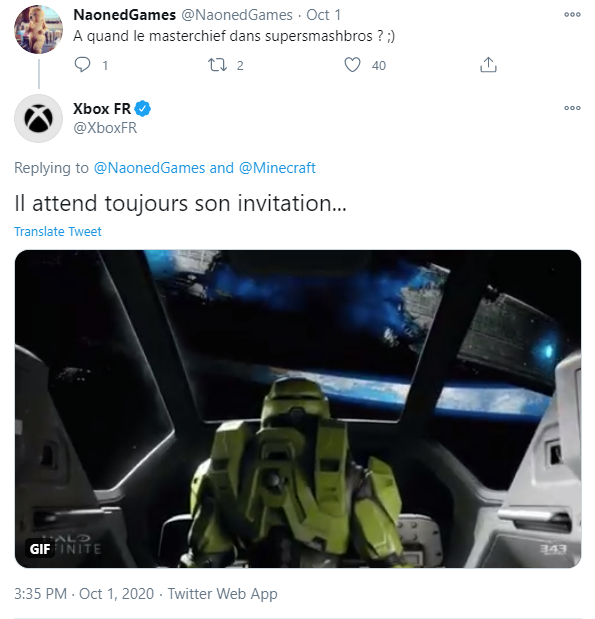 @NaonedGames tweeted the account asking when Master Chief will be added to Smash Ultimate.

The account replied: "He’s still waiting for his invitation."

It certainly looks like Microsoft would be open to the idea, they already allowed Banjo & Kazooie to be reunited with Nintendo, so why not add more?

Perhaps the GIF used in their reply is a small indicator that he may come nearer the launch of Halo Infinite.

While one account does not represent the entirety of Xbox, it's a good sign for fans of Halo and Smash.