You won't need to be Bloodhound to keep a track of your damage!

Players are always calling for new additions to their favourite games.

Apex Legends Season 6 has added a bunch of new content, but it wasn’t quite enough for everyone.

Though tweets by Respawn developer Jason McCord show that the team are always looking to make improvements, that go beyond just changes to weapons and Legends.

This latest quality of life feature would see Apex Legends showing a tracker for how far players are from completing challenge which requires a certain amount of damage to be dealt.

It might seem small, but for hardcore fans it will undoubtedly be useful.

However, following a fan question, Jason McCord stepped in to clarify that the requested feature was on a list. 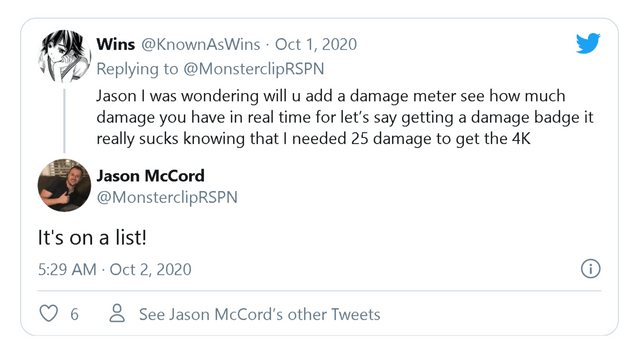 As shown, user @KnownAsWins was wondering about a damage meter, saying that it would be useful to know how far away they are from a specific total.

This would undoubtedly be really useful for players, and could benefit Respawn by encouraging players to play just one more match if they are near the next milestone!

It will likely be a while before this specific damage tracker feature releases but it is a good sign that Respawn are listening to fan requests.

Ongoing games like Apex Legends rely on retaining players, which can only be done if developers keep them happy with new content and quality of life fixes.

When Will The Feature Be Added?

“It’s on a list!” is not the most informative statement, but potentially a damage meter feature could be coming to Apex Legends alongside these others for Season 7.

The improvement could also be helpful for tracking objectives that will likely come in the upcoming 2nd Anniversary for the game.

We’ll let you know as soon as we have more details!

What features do you want to see added? Let us know!