Learn from the best of the best!

Fortnite Chapter 2 Season 4 has to be one of the game’s best so far.

It’s no surprise then that huge names, like Tyler ‘Ninja’ Blevins, are making a return.

But with these massive, and exceptionally talented players coming back, do us other players stand a chance?

If you are looking to up your game, maybe hiring a fellow pro to coach you is exactly what you need!

Though you will have to be one of the lucky few if you want Team Liquid’s Cented to help you get good.

The Best Training The Best

A couple of days ago, with Season 4’s Fortnite Champion Series looming on the horizon, Evan ‘Cented’ Barron announced on Twitter that he wants to coach up-and-coming players. 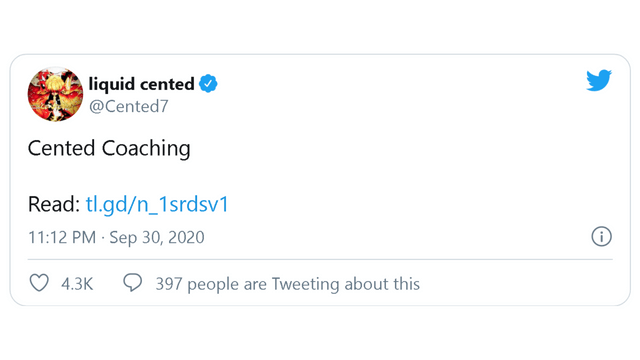 The pro will coach up to ten players, with sessions costing $100 at a minimum of one hour.

The focus of the lessons will be not only teaching general gameplay but how to be an in-game leader.

In team games, when everyone will have their own opinions and strategies, it’s vital that one person takes on a leadership role to ensure that the group can act as a unit.

Cented’s teachings, made up of VoD reviews, drop spot tips and team-role breakdowns, will help players understand this and will also be raising money for Black Lives Matter charities.

Within the announcement, the Team Liquid player stated that he is donating “50% of all coaching proceeds to Black Lives Matter associated charities”.

He added that he isn’t looking to personally benefit from added attention or recognition but is instead hoping to encourage others to do the same and is “echoing Team Liquid’s official statement on BLM: Black lives matter.”

If you aren’t already tied to an at least semi-competitive Fortnite Team, you’ll probably struggle.

In the advert, the pro is looking for specifically “competitive players” and he’ll only teach ten of them.

There also isn’t any guidance on how to contact Cented if you are interested either, but a Twitter DM or an old-fashioned email to Team Liquid or Cented could do the trick?

Though be sure on the lookout for other pros who will hopefully be offering similar deals in the near future!