Ninja is back playing Fortnite! What does the star think of Chapter 2 Season 4?

Fortnite Chapter 2 Season 4 has been full of surprises so far, not least of which is the return of a legend!

At one time it was impossible to separate streamer Tyler ‘Ninja’ Blevins from Fortnite.

He was one of the game’s best players and very quickly rose up in fame with streams showing off his skills.

Though, despite being honoured with his own in-game skin, Ninja has been taking a break from Fortnite.

That is until this Season.

“When was the last time you saw me playing Fortnite Solos?”

As soon as Chapter 2 Season 4 released, Ninja was interested.

He reached out to SypherPK to organise a co-stream, and a couple of weeks later, the pair were Duo’d up.

A week later and the near-impossible happened, Ninja was back playing solos.

He explained his extended break to his chat, describing the last two seasons as “super stale, super boring.”

But with the addition of new superhero powers and some returning fan favourite classic items, Ninja only had praise for Chapter 2 Season 4.

“I’m having a blast man, it feels good again. It feels fun.”

Should There Be A Fortnite Pro League?

The return of Ninja to Fortnite has also seen him calling for changes to the competitive side.

Over on Twitter, the streamer suggested that an official Epic Games sanctioned Pro League is what the game needs. 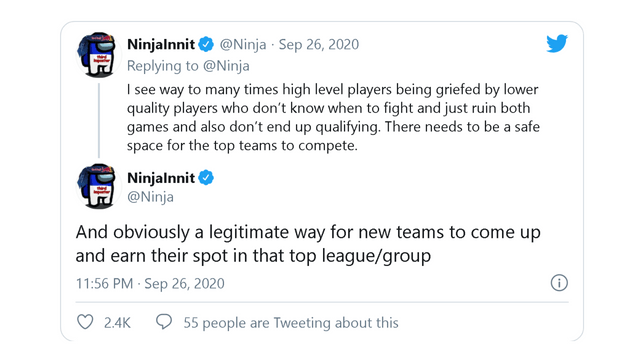 It looks less than likely that such advice will be followed by Epic.

The company have spent so much time promoting that anyone can be a pro player and win money in a tournament.

Hopefully, Epic Games can find a way to answer the demands of their top players, otherwise, they might lose Ninja all over again.