Are the new PS Plus October games actually worth downloading?

The new PS Plus October 2020 free PS4 games have been revealed by Sony PlayStation.

For those who missed the news, you'll soon be able to download the racing game, Need for Speed: Payback and the action RPG, Vampyr.

Keen to know more about each game? No problem, here you go:

Survive thrilling heist missions, partake in metal-crunching car battles, perform dazzling setpieces and more in this four-wheeled action blockbuster. Set in the fictional, corrupt gambler’s paradise of Fortune Valley, choose from three different characters – each with their own unique skills – customise your rides and take on an open world’s worth of events as you seek revenge on those who wronged you.

Burn rubber in Need for Speed: Payback, or stalk your prey as the Vampyr in your PS Plus games for October: https://t.co/DLDIeSPmNQ pic.twitter.com/6eHzstTcGZ

Life is Strange developer Dontnod Entertainment challenges you to embrace the darkness with this 1918-set, third-person action RPG with deep narrative choices. Play a doctor turned vampire ghosting through a London gripped by violence and fear. Use your supernatural abilities, as well as man-made tools and weapons to fight or flee the forces of evil and vampire hunters. Save the city’s populace or feed on them to become stronger, but giving in to your bloodlust can have grave consequences…

Both games are available to download from Tuesday, October 6 until Monday, November 2.

But the question some PS Plus subscribers could be asking, is, are these games any good? 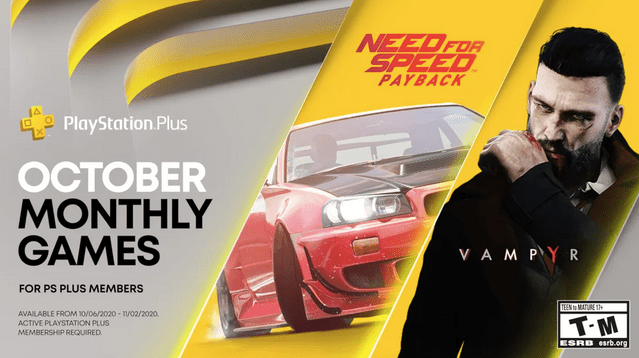 Whilst you might be keen to add them to your sub, should you download them? Should you make time to place them? Here's a recap of the games Metacritic scores and some choice comments from the leading reviews.

GamesRadar+
"Need for Speed Payback successfully returns to its Fast and Furious roots with aplomb, but a focus on the grind and a beautiful but empty world means it ultimately falls short of greatness."

"Need for Speed Payback's banal racing is only magnified by this focus on grinding. The simple, almost retro, handling model provides occasional bouts of fun, but it's never enough to escape Payback's flaws, with an unwillingness to let you partake in its most hair-raising moments, and a general drabness that seeps into every layer of the game. Fast and Furious, this is not; and that's a disappointing outcome."

Need a new PS Plus Subscription? Save £10 off a PS Plus 12 Month Sub With This Link!

Wccftech
"Dontnod worked hard to create an immersive, dark world to explore and it succeeds in doing so. Despite some boring conversations, most of the world of Vampyr is an exciting, dangerous place and if nothing else, being a vampire in here is also very fun."

Trusted Reviews
"Vampyr might not be what many wanted after Life Is Strange, but it’s still an enjoyable – well, as enjoyable as its grim nature allows – game nonetheless."

Playstation Official Magazine UK
"Awkward at times, the developer's ambition is obvious but the effort never quite comes to fruition. In other words, it doesn't suck but it lacks bite."