This Marvel crossover in Fortnite Chapter 2 Season 4 has to be one of the best yet, but is it about to become even mightier?

This Marvel crossover in Fortnite Chapter 2 Season 4 has to be one of the best yet.

And if some Marvel Comics cover art is to be believed, fans of Earth’s mightiest heroes are about to in for even better news!

If you weren’t already satisfied with the skins and heroic abilities that have already been added to the game, such as the latest Wolverine, some of these new possibilities are likely to be very exciting for you.

The variant covers for Marvel comics are beautiful their own but, as some fans have noticed, they could hold secrets teasing upcoming Fortnite content. 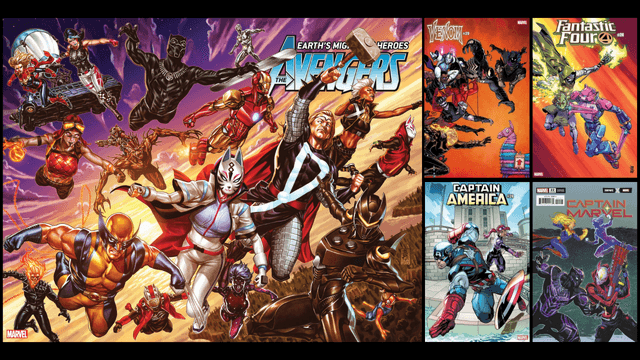 As shown above, the images highlight various Fortnite skins, both classic and Marvel-themed, that are already in the game.

We can see Jonsey, Brite Bomber and Mecha Team Leader, as well as plenty of others, teaming up with Iron Man, Captain America and Doctor Doom.

Though a few unfamiliar faces on the Fortnite island make an appearance too.

Captain Marvel, Daredevil, Ghost Rider, Venom and Black Panther all show up in various artwork, some multiple times, and this could be hinting at their addition to the game in the near future.

When Will They Be Added?

As of now, there is little else to indicate these characters will make a full appearance.

Venom and Black Panther already feature via in-game items and POIs, potentially their inclusion could be expanded to skins too?

Additionally, we have already seen Blade be added after being teased so its not entirely out of the world of possibility that others could be too.

Captain Marvel is hugely popular both in the comics and after her film debut in the MCU, many fans would love the opportunity to play as her and maybe even wield her cosmic powers in Fortnite.

Daredevil and Ghost Rider are slightly more niche favourites, but so was Blade so never say never, and their powers could make for some cool in-game items.

Perhaps we could get a reusable thermal vision to match up with Daredevil’s radar sense, or a vehicle which leaves behind a trail of fire like Ghost Rider’s iconic motorbike!

For now, we’ll just have to enjoy what’s already in the game, and on that front, there is so much to enjoy!