Be prepared to do a lot of installation shuffling.

Xbox Series X will use 20% of its internal SSD storage for its system software, according to a deep dive from IGN.

In the preview, it is revealed that there is actually only around 800GB available for game installations and data.

Xbox Series X Reserves 20% Of Its SSD For System Files

The same preview also notes that the console's pricey 1TB expansion cards also require 80GB of space to be used by the console's system files.

That could be an issue, as next-gen games (i.e, Xbox Series S/X titles) must be installed onto either the internal SSD or expansion cards to be able to run at all.

Check out a screenshot from IGN below: 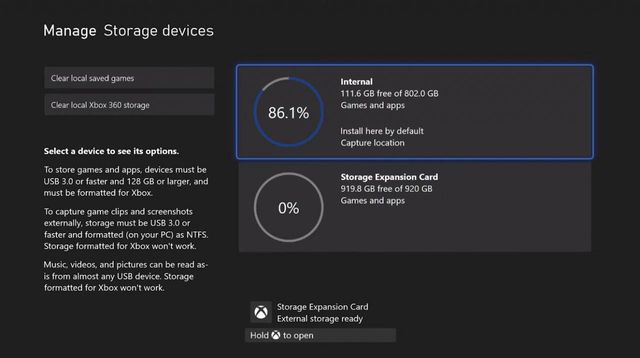 The preview does confirm that games from previous generations can be run from standard USB 3.1 hard drives, but as IGN notes, it's arguably easier to transfer your content to your internal drive as you wish to play it:

“A more affordable alternative is to use a cheaper USB 3.1 external hard drive to store the next-gen games you’re not playing and just shuttle them back and forth as you want them, sparing yourself the need to download them every single time."

Of course, while the Xbox Series X will offer a 1TB SSD, the Series S offers 512GB.

We're yet to find out how much of this is earmarked for system storage, but we do know that the reduced resolution means installations could be smaller.

“With a performance target of 1440p at 60 fps, our expectation is that developers will not ship their highest level mipmaps to Xbox Series S, which will reduce the size of the games,” Xbox's director of program management Jason Ronald recently told IGN.

“Ultimately the controls in the developer’s hands. We’ve had this technology for a while that allows developers to intelligently choose which assets to install on which device they’re playing on. So the flexibility is in the developers’ hands to make sure the right assets are there.”

For more on the differences between Series S and Series X, be sure to check out our price comparison here, as well as our full specs comparison here.