Master the AS VAL with these three loadouts!

The AS-VAL is a nice weapon to mix things up in Modern Warfare and Warzone.

Season 6 saw it make it into the game as one of the last weapon drops in the Modern Warfare era.

The AS VAL assault rifle (AR) and the SP-R 208 marksman rifle are the latest additions to the game, and both have the opportunity to spice up the metagame.

Here are the best attachments for the AS-VAL in Modern Warfare and Warzone.

Despite the high levels of recoil, the AS VAL is perfect for players looking for a deadly AR to dominate the battlefield.

Thanks to its integrated suppressor, the AS VAL is perfect for keeping your location on the map hidden from any opposition.

The high rate of fire enables it to excel in close-quarters engagements and with a bit of trigger discipline, it can be extremely efficient when taking on targets at longer distances.

The Best AS VAL Warzone Loadout

The AS VAL often files under the radar when it comes to weapon selection in Warzone.

Although the AS VAL possesses impressive damage at close range and moderate recoil, its small ammo capacity often deters players from using what is an incredibly strong weapon.

For those that want to give the AS VAL a spin, here are the best attachments to use:

This combination of attachments doubles the bullet velocity, drastically increasing the AS VAL's effectiveness in any close-quarters engagements.

The G.I Mini Reflex may seem like an unorthodox optic selection but considering how effective the AS VAL is in close and mid-range gunfights, it's the perfect choice for a clear image of what's ahead.

This class fully utilises the integrated suppressor, enabling you to pull off unthinkable plays with absolute ease. 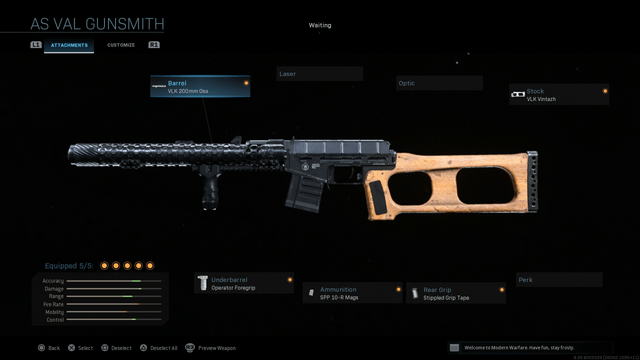 This combination of attachments drastically increases the accuracy of the AS VAL, making it much easier to control when attempting to eliminate a target from a distance. The addition of the stippled grip tape increases aim down sight speed, allowing quicker reactions when you come across an enemy.

Despite only 10 bullets in the magazine, the increase in damage they provide allows you to drop a target with just two or three bullets regardless of range. It’s very easy to go on a rampage with this particular loadout.

Double time doubles the length of tactical sprint, enabling you to spring across the map much quicker than normal.

Ghost keeps you hidden from any enemy UAVs furthering your ability to move around undetected and with limited ammunition, Tracker allows you to see the footsteps of nearby enemies, giving you the perfect opportunity to take them out without them ever knowing you were there.

C4 has quickly cemented itself as the most popular piece of lethal equipment in Modern Warfare thanks to its incredible versatility. Use it to clear out a densely populated area of the map or even use it to destroy any land-based killstreaks halting your progress.

Read More: Modern Warfare And Warzone Season 6: How To Unlock The SP-R 208 And AS VAL

This may seem like a questionable choice of Field Upgrade but a well-placed piece of deployable cover can often be the difference between an untimely death or a string of kills towards your next killstreak!

This combination of streaks packs a hefty punch and can be easily obtained. The missile is perfect for grabbing a kill on a target in the open, the Wheelson can be navigated into almost any location on the map, and White Phosphorus deals damage to ALL enemy players, making them easy targets for you and your team to clean up.

Read More: Warzone Season 6: How To Get The 'Foresight' Killstreak And What Does It Do?

Class number two is ideal for players that love to get in amongst the action. 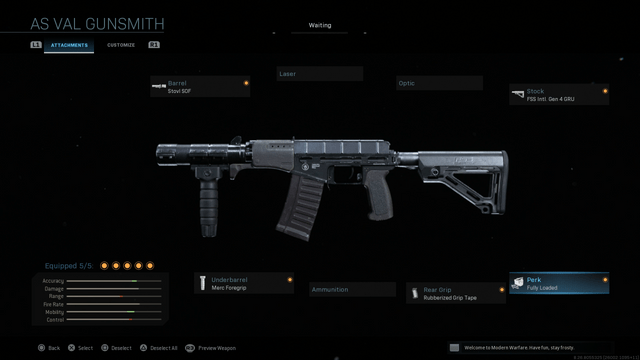 The AS VAL certainly packs a punch

This set of attachments provides a much-needed increase in aim down sight speed while reducing recoil to a more manageable level.

The inclusion of Fully Loaded as opposed to Sleight of Hand may seem like an odd choice, but with the maximum amount of ammo already in your pocket, you can stay in the fight for a lot longer.

Quick Fix drastically speeds up health regeneration, perfect for when you’re contesting an important area of the map.

It’s very hard to go wrong with a frag grenade. It can be used in a multitude of ways, often resulting in a kill or two added to your score.

The smoke grenade is an interesting use but thanks to its versatility, it makes for good improvised cover or even as a distraction to set up a potential ambush on the opposition.

Perfect for navigating the map undetected, dead silence is the perfect tool to flank behind the enemy team and eliminate them with ease.

Combined with the integrated suppressor of the AS VAL, they may never even realise you were there!

This is the perfect combination of providing support for your team and going on an all-out rampage.

The UAV unveils plenty of information regarding the location of the opposition, the Sentry Gun can provide plenty of cover in a hotly contested area of the map and we all know what a chopper gunner can do when in capable hands.

The third and final loadout favours those that prefer to play more patiently. Even though you’re not in the action, it still has a lethal impact. 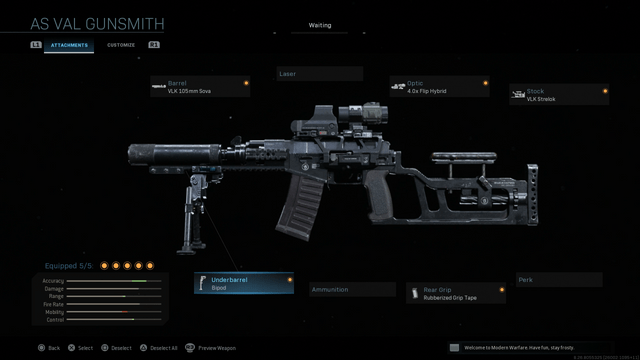 Built in the 80s: A potential link to Black Ops Cold War?

This may look like a random set of attachments thrown together but each plays a crucial part when it comes to dealing plenty of damage at long-range.

The stock keeps recoil down to a minimum alongside the bipod which further reduces recoil when crouching or prone.

The hybrid optic is the party piece for this particular loadout. It provides a clear picture of the target no matter how far away they are.

Scavenger enables you to resupply ammunition of any fallen enemies, perfect when outside of the main action on the map.

High Alert increases your levels of awareness when scoped in. Keep an eye out for those pulses which indicate when an opponent has clocked your location!

Shrapnel gives you the ability to spawn in with an extra piece of lethal equipment while any explosive damage dealt to the enemy will delay their health regeneration.

It is extremely difficult to counter a well-placed proximity mine. Set it up in a dark area close to your location to give a sneaky enemy a nasty surprise.

The snapshot grenade is perfect for giving you a small glimpse of the battlefield ahead of you. Throw it ahead of you to reveal any opposition encroaching on your location.

Bolster your defences by selecting a trophy system as your Field Upgrade. Thanks to its ability to block up to three pieces of enemy utility, it can keep you safe from anyone looking to eliminate you with a well-timed grenade.

By playing more passively, the opportunity to score some of the higher killstreaks on offer is much higher than playing in amongst all the action. All three of these streaks can deal an incredibly high amount of damage and can often be the difference between a win and a loss.