Is Jack Cooper about to Titanfall into Apex Legends?

Apex Legends is currently in Season 6, there are plenty of weapons to use and Legends you need to be playing as so that you can play your best!

Things could change with Season 7 around the corner as more Titanfall could arrive, fresh off of a Titanfall 3 leak!

A familiar face may arrive soon...

Is Apex Legends about to be getting more Titanfall content in an upcoming season?

Respawn Entertainment’s lead writer is teasing just as much over on Twitter, suggesting Titanfall 2 protagonist Jack Cooper could be coming to the free-to-play battle royale.

That is if the Titan pilot isn’t in the game already!

It’s long been known that Apex Legends and Titanfall share a universe, a fact that has had fans begging for more tie-ins between the two games.

Jack Cooper would be the biggest by far and he certainly has plenty of skills to go up against the games other Legends, even without his Titan mech BT-7274.

The tweets in question come from a Twitter reply by Manny Hagopian, Respawn’s Principal Writer.

After YouTuber staycation speculated that Jack Cooper would be arriving in Season 7, Hagopian responded witch speculation that he may already be in the game. 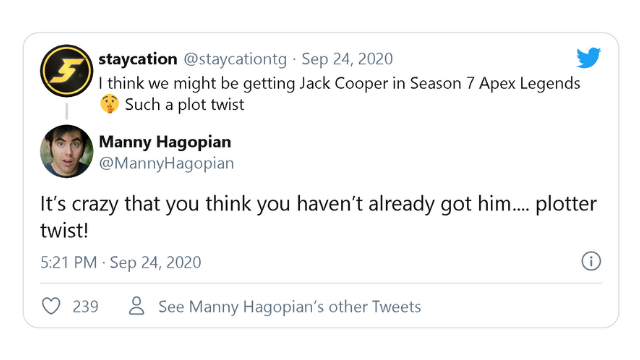 Is It All Just A Hoax?

It’s certainly possible Jack Cooper could be hoping to finish off his old enemies for good.

Though unfortunately, this wouldn’t be the first time that Respawn has made a joke at player’s expense.

A few months ago the team even made up fake in-game files and assets for a new Forge Legend, only to brutally kill him off days after unveiling him.

If they are willing to go to all that effort to trick fans, a few joking tweets wouldn't be unlikely.

But hopefully the dream of dropping a Titan into Apex Legends could be a little closer!

What do you think of this potential crossover? Do you want to see more Titanfall in Apex Legends? Tweet Us!